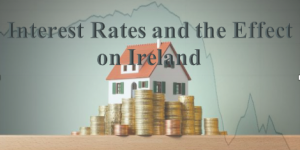 Lending has become less attractive because the uncertainty of returns on loans. Because repossessions are not tolerated in Ireland, as long as this approach remains, interest rates here will always remain higher than the euro zone average.

Interest began to slowly rise in September of 2018 for the first time since the economic crisis. Although the rise in rates signifies that the economy has been growing, heightening rates could help stabilize growth.  The main reason that this insecurity exists because of the financial crisis. High interest rates help consume any likely future losses, and therefore potential bailouts can be reduced.

What are the implications of high interest rates?

High interest rates of Ireland effects all of those who have mortgages. In comparison to other eurozone nations, the Irish are paying much more every month on their mortgages as a result of higher interest rates.

Mortgage bankers must be careful about the loans for mortgages give because of the high risk associated with giving mortgages due to the lack of ability to repossess property due to mortgage arrears.