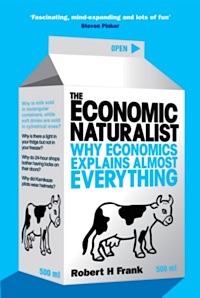 Robert H. Frank of Cornell University wrote a great book called ‘The Economic Naturalist, why economics explains almost everything‘, it has been an absolute winner of a read, and kindly Robert (Bob) took a phone call from me to talk about his book (more on that later).

Regarding the book, it is excellent if you are not actually into economics, because it takes everyday things and tries to use economic foundations for explaining them, the questions are simple every day occurrences and the answers are often surprising!

Here are a few simple examples, ‘why are cans of fizzy drinks round and milk bottles are square’, ‘why do animal rights activists throw paint at women in fur but not bikers in leather’, ‘why do taxi drivers stop working early on rainy days’, ‘why are plane tickets purchased at the last minute more expensive’, and many others.

Granted, you’ll know some of the answers [e.g.: I wouldn’t throw paint at anybody, but if I did it wouldn’t be at a biker who’d likely beat me to a pulp!], however, other answers are really quite exciting and once you get going on this book you’ll whiz through it, because the topics are changing it is also the type of book you can put down for a while then pick up again a few weeks later and get right back into it, mind you, I kind of did it from cover to cover!

One of the most brilliant aspects of this book is that it takes the topic of economics and takes away that ‘it’s only good as a cure for insomnia’ veneer and shows it for what it is, which is the science/art/reasoning behind much of what we do and why we do it, both as individuals and as societies. If I ran the show (show=world) kids in school would have to read this book.

Robert H. Frank is (in my humble opinion) a genius because anybody who can take a specialist topic and make it understandable to the masses is a true educator, mind you, his co-author on a popular university text book was Ben Bernanke, so it is fair to say he was never intellectually ‘slumming it’ in his time as an economist.

In making this review I read other reviews and was saddened to see that a person said ‘little new ground is broken and the questions are more brilliant than the answers’, I would wager this is simply not the case, because although I know that nuclear physics exists, nobody ever explained it in a way that made sense to me, and good answers can only come from asking the right questions, so if the questions are good by inference the answers must be too.

One of his ongoing campaigns is to take economics back from the quant’s and the mathematicians, I tend to be a proponent of this as well, not because I don’t think that mathematics is vital, relevant, or useful, but because mathematical modelling has too many pitfalls, Shane Whelan of UCD gave a great talk on this before to the CFA, and LTCM (famously crashed hedge fund) was run by Nobel winning quantitative analysts. I think that we will get greater understanding from the development of the social/behavioural side of economics in the next ten years than we will with the mathematical.

This book is a definite 9/10 in my opinion and certainly worth reading, an eye opening journey through economics told in anecdotes and easy to understand bite size stories, anybody can enjoy this book as it is not designed to test intelligence but rather to seek real-life answers and it does so brilliantly.