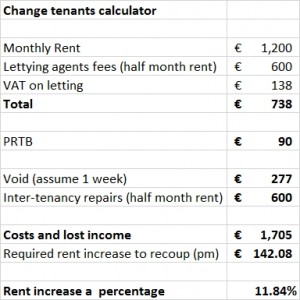 This is yet another reason that shows the benefit of a long lease to a landlord, equally the tenant also benefits by having the protections of a fixed term lease which are relatively absolute.

The way to deal with rent changes or fluctuations can be dealt with within the contract, one route is to have a review every number of years and have a clause whereby rents won’t go up or down by more than 10% every three years.

This avoids the necessary ‘catch up’ the calculation above shows – don’t forget that in this instance the 12% increase has to come about just to stand still, it’s only getting the landlord back to their break-even point.