Rent control, a misguided policy that just won’t go away

The idea of rent control is always a compelling one, that by decree you simply say ‘the price can’t rise’ and then it doesn’t. That this is a proven myth rarely factors in, take cities in the USA with rent control and you’ll also see that these same cities have some of the highest rents (like San Francisco and New York) because all rent control does is confer a transfer onto the incumbent renters.

When it happens for long enough you eventually get a disproportionate cost being carried by some cohorts who become structurally less well off because they face vastly different cost bases in rents even though they may earn an identical wage to their neighbour. It’s no wonder there was even a Mayoral Candidate in New York who’s party was named ‘Rent is too damn high!‘. Check out his debating style which is memorable if nothing else.

If housing cost control was a good idea then why not enforce it on all participants and do the same for capital values, all you’d have to do is say that no house can cost more than €100,000. If you can see the obvious flaw there it helps to see it on the rental side.

There is already rent control in parts of the market that are state supported because maximum contributions set the achievable rent (in part), at the same time higher standards in rental accommodation (2008 rental accommodation regs) mean you are getting more bang for your buck across the whole sector than previously while the state has raised provision costs through imbalanced taxation, NPPR (now defunct), PRTB which is funded by only one of the contracting parties and property tax, so in part rising rents are a cost push issue as well as a supply and demand one.

Jan O’Sullivan has mentioned rent control of late, that tenancies are covered by the 2004 Tenancy Act is not questioned, but the nature and how people contract together, and at what price is perhaps a different matter and shouldn’t be confused as being something that a Minister for State can interject in.

What she isn’t saying is that all two bed apartments must cost a certain amount, rather it is that rents can’t rise above a certain amount every year. In Ireland there are a few things that make implementing this idea tricky even if you are amongst those misguided enough to believe in it.

Firstly is that Irish people tend to favour 12 month leases, as a landlord we always offer a five year one and voluntarily have an element of price fixing built into it which means the price can’t fluctuate more than 10% during that term, but clients almost never sign up for this.

Secondly is that when a plan like this does take effect people don’t move and use property efficiently because the new opportunity cost becomes too high and then you get a situation like you have in New York where the old lady on the fifth floor pays $500 for the same apartment the person on the floor above is paying $5,000 for. It becomes a transfer to those who don’t move and encourages inefficient use of property.

The state will naturally push up costs (as they are want to often do) and this, along with a set ceiling on income leaves less and less to put towards maintenance while a building ages – the very act of which requires more maintenance.

It also discourages investment in the built environment which was a known issue in Dublin where the rental accommodation was of a low standard.

Thirdly you have the fact that this is partly contract law which is primarily covered by precedent and there is already an existing test case from the 80’s which showed it was unconstitutional, if it is a constitutional question does it require a referendum to amend?

We then default into one of the most broken yet appealing arguments available which formulaic in nature and goes like this: (D + P + C + E) – (A – R – F) = G where

D = Desired outcome
P = Is possible in
C = Country (in this case Ireland), because
E = it works in Example Country (often Scandinavian nation)

equals ‘G’ which is a ‘Good outcome’.

Saying that rent control works in Germany has nearly no relevance to Ireland any more than saying that something entirely structurally different there has a relevance to here.

For instance, in much of the German private rented market you move into a house and have no kitchen! You have to buy and install your own. If landlords were spared the expense of a kitchen and the maintenance of all white goods that go with it would rents be more stable? The answer is yes. Would they be lower? Given that a kitchen is the most costly room in a property to create (bathrooms typically a close second) then yes, because your cost of provision would also be lower.

Is anybody saying we should rent out unfurnished houses with no kitchen? Of course not! We don’t want the German baseline scenario that creates all of this, we just want the outcome minus those other uncomfortable facts.

If other countries introduce ‘limits’ of cost per square meter will people find ways around it, perhaps, landlords might start to include common areas on an apportioned basis, it may create a transfer to some landlords or encourage people for reasons of affordability into less suitable accomodation because their affordability is negatively impacted. Or a black market develops, have a look at the supply/demand chart. 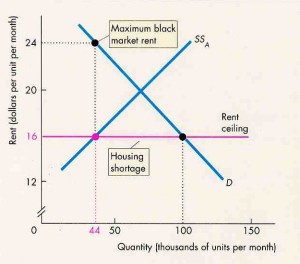 What happens when you put all of the less well off together and all of the more well off together – it creates class division and the lower rent areas don’t usually have lower construction or maintenance costs so deterioration in that housing stock is more likely as it is serviced with lower income sums. This can happen anyway but is exacerbated by rent control. That you can find well kept properties in less well off areas is usually never as a result of any rent controls.

Ronan Lyons who is a housing economist isn’t convinced, while Threshold say it could ‘play an important role in protecting the less well off’ which is only partly true because it only protects todays less well off at the expense of tomorrows less well off. They are also a financially unimpacted third party so it is natural for them or any lobby group to be in favour of costless (to them) remedies that make them better off. Ask yourself if you’d like a €1,000 cash gift which will be obtained by a supertax on people with a net worth over €1m, if you answer ‘yes’ then you understand the theory perfectly.

The most damaging thing to ill thought ideas is often fact, because you can make anything sound plausible in conversation so instead let us apply some actual facts.

If Jan’s Idea (which she said would be linked to CPI) actually went ahead then where would we be now? Below is a chart of the CPI over the last number of years (this part is all thanks to Seamus Coffey who does a better job of it over on his Economic Incentives blog). 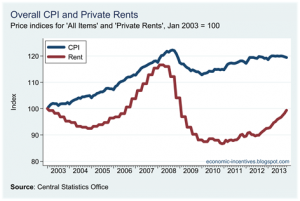 What you see is that CPI is about 20% higher, while rents are up just over 8%, had we adopted this policy in the past rents could (using this logic) be 20% higher than they are now.

Seamus says it best “There may be calls for rent controls now when rents are rising faster than the CPI but would a counter-factual with rent controls in place have seen rents fall by 25 percent in two years when the overall CPI fell by less than 8 percent over the same period?  Will rent controls be effective only on the way up and not on the way down?“

The second and even less comfortable fact is that when it comes to big bad landlords jacking up the rent the ones we think of first are not the most culpable. Private rents are up about 8% but look at public rents in comparison, the actual greedy landlord is the state.

When comparing private rents versus those of local authorities we see that the private sector is back at 2003 rates having gone through a downward spell after the property crash, but local authority rents have gone up come rain, hail or shine, by almost 80% over the same period!

If we are going to start with rent controls perhaps it should be with the sector where it is most evident that prices are being unfairly manipulated (state housing) and which house the nations most financially vulnerable (those in state housing).

It’s all glass houses and stones some days.