In fact, when it comes to people in the lowest quintile of income, we are exceptional because many of them own their own homes outright, this is because ‘income’ and ‘wealth’ are not the same thing. In the following table the OECD data shows that the majority of the lowest quintile of income own their homes either outright or with a mortgage. This is consistent in Ireland, in every income quartile the majority of people are homeowners (chart below). 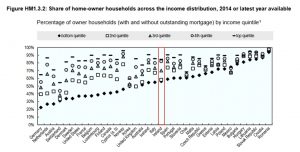 Within this mix we have thousands of under-occupied private homes, and also of public housing homes too. The usual thing that people say is wrong with a stick approach to property tax is that it hurts families with young children, or that it hurts adults who live alone.

In the case of young children that is easily rectified, in the case of adults we need to get our heads around the idea of why we ought to defend millionaires, because certainly in the case of large homes in Dublin there are many people living in homes worth that amount and paying very little property tax.

Under-occupancy comes at a price, that price is that families are left to face higher costs while the state funds examples of when this fails (such as the homelessness crisis, which wreaks many lives in the process). At the same time, people who under-occupy say they’d leave if they had a choice of where to go.

Having spoken to many people I don’t believe the last statement on its own is true because there is no compulsion, when there is no price there  is no need to consider anything other than the status quo so it becomse a textbook fallacy based argument because:

1. Nobody asked for property owners opinion when it comes to property tax, it is there to fund local authorities so where you live is of secondary concern.
2. If a smaller place was all that was required then you’d see small units being bought by asset rich older people but that isn’t happening.
3. The children of said asset rich people would also be upset because many live in expectation of inheriting that wealth when their parent dies.
4. Without any compulsion no argument is valid because it’s assuming that if you built smaller homes that people would be happy to move and they haven’t done this in their droves when smaller homes become available in different localities.

So what would a property tax look like that is both carrot and stick? We’ll start with the stick, a 1% property tax on all properties, no larger price for bigger homes or lesser price for smaller homes, just a 1% flat rate payable by everybody.

Crucially, we should start to have people in council owned homes pay property tax too, that is one of the ways to encourage better use of them.

What about people living on their own in a large home like that? Simple, they pay €10,000. They can choose not to but it goes against their home as a lien where any increase in property value is negated from the start date with standard Revenue penalty interest added on top. This would mean that if prices double any beneficiary would never benefit from the uplift in values and the tax would start to eat into the estate.

That’s just some basic thinking around the idea. The other ‘stick’ would be to bring back indexation and steadily take away PPR relief on selling a home, except for in cases where the person is going to downsize or not buy again. In that example full PPR relief could apply. They might choose to buy an even bigger home in Leitrim but there is no housing crisis there.

The carrot would be to have a state funded bridging facility, or one that is operated via the banks that facilitates a credit line to ‘bridge’ one sale into the next, this is an actual obstacle for older people because this type of financial product is not readily available. It would give people a chance to liquidate some of their assets in life, move to cheaper housing of their choice, or even move in with a friend, it wouldn’t really matter. This could go with waiving stamp duty on homes and even a special VAT rate on new builds or other incentives.

It’s a tough conversation to say you want old people to move, but there is nothing in a persons age which should offer them invoilable rights when weighed against the children and working adults. A fair society doesn’t make it their business to bestow property wealth on certain cohorts who happen to be holding land at certain times.

We need to have a national conversation about sticks.