Net migration (the numbers arriving minus the numbers leaving) into Ireland was strongly positive from 2005 to 2008 with 2009 almost neutral (slightly positive).

When the net migration figure was strongly positive this gave rise to an extra strong demand for housing in both the rental and purchase sectors. Most migrants tend to come from the first time buyer segment of the population i.e. 25 to 35 years old.

While there were relatively low numbers of native Irish leaving and relatively high numbers of non-Irish arriving, this increased demand from this key cohort. As can be seen from the chart below the graph of net migration matches closely that of the property price index.

Net Migration is given in thousands and the property index is 100 at January 1st 2005. At present Migration though still negative is on an upward curve and has been since 2012 closely reflecting the recovery in the property prices. (CSO, n.d.) 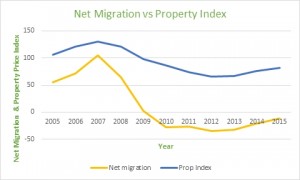