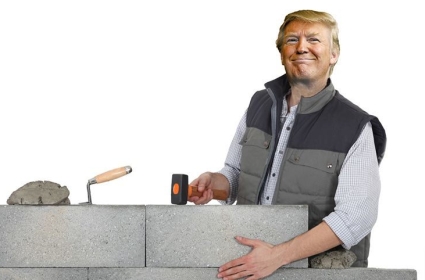 Commentators in Ireland love looking down on Americans, even more so since Donald Trump beat establishment insider Hillary Clinton.

They seem unable to stop labelling and name calling ‘the deplorables’, while forgetting that acceptance and tolerance used to be their moral high ground. As an American in Ireland, this makes me think about the po-faced hypocrisy of it all.

“He said build a wall,” I hear people cry, as if that alone is the acid test of an entire nation’s future. It’s true, he said some mean things; he didn’t use the language we like and accept. So here are a few home truths about our own great Irish walls – the ones that are far more acceptable than Trump’s because they aren’t referred to directly.

Many of them are invisible, which makes them seem okay, but in reality the outcome is the same. They just don’t sound so Six-Hirb’ish (that’s sexist, ignorant, xenophobic, homophobic, Islamophobic, racist and bigoted).

We don’t have Mexicans in Ireland, but we do have other minorities such as Travellers, who we build walls to stop. …