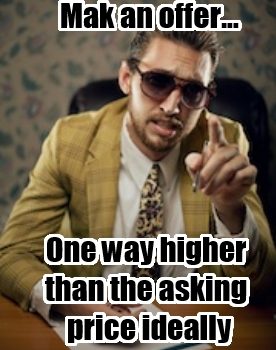 Estate Agents – amazing how nothing has changed

Something which never ceases to amaze me is how estate agents have such an uncanny ability to capitalise on any opportunity. It’s really something to be admired, the absence of a hard sale makes it particularly difficult to spot, but like sharks who can smell blood at one part per million.

One should clarify, I like estate agents, it doesn’t mean I don’t know when they are making a market. The recent practice of only having three viewings or viewings that can only take place in one week is a recent addition to the toolbox which is designed to have a few effects.

This was something I thought was a bit sharp but rare, then today encountered three times in an afternoon of making calls. The method goes as follows:

1. List a property at a price so keen that it is bound to attract a lot of interest.

2. Field lots of calls as interested buyers ring in, about 7/10 will be tire kickers because the true price sought is way over list but the innocent/uninitiated will show …