Pat Kenny interviewed Karl Deeter about the Central Bank lending rules and why, in his view, they could have been done slightly differently and better. It’s an interesting insight into the difference between control-lead regulation and results-oriented regulation. 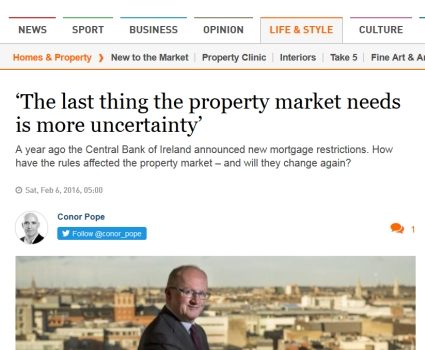 Conor Pope from the Irish Times had an interesting article on lending restrictions and did a good piece on it in today’s paper. In the piece he quoted Karl Deeter from Irish Mortgage Brokers on his views about the effect of the Central Bank rules on the property market.

“Karl Deeter, a mortgage broker and keen observer of the property market, has written an extensive report on Dublin’s boom-and-bust cycles spanning 300 years. He is not one of the Central Bank’s cheerleaders, and he is unconvinced that the 2015 scheme deserves much credit.

“I don’t think the new rules have had any real impact on the house market despite how it might be characterised,” he says.

Deeter points to an International Monetary Fund study of six countries that introduced lending restrictions. The report indicated that the rules made little difference, he says.

“In the credit market the rules have caused a fair bit of chaos. But I think prices were going to slow down anyway. We are in the middle of a property cycle, and cycles …