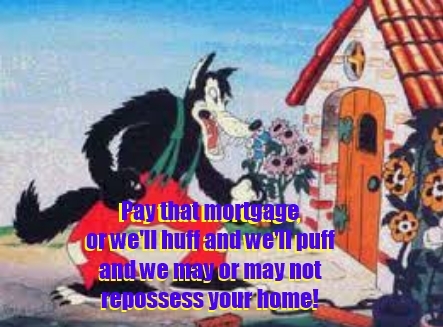 Banking flim-flam, ‘We’ll huff and puff and may or may not blow your house down!’

The banks are constantly issuing threatening letters, we have posted many of them here. We have seen it all at this stage, couples in their 60’s with lots of equity being told to sell up when they clearly didn’t have to, others who are able to get massive write downs and every other combination of fact you can imagine.

Today we will look at the huffing and puffing portion of banks chasing a person for debts. The page to the left is a chronological example of letters a borrower will get from the bank. In this instance the person is defaulting because they don’t want to go on capital and interest and are engaging in what amounts to a game of ‘chicken’ with the banks.

The first letter is standard, it came after the client missed about 4 months of payments, to this point there were two calls then this letter.

The letter starts off fairly heavy, in terms of implications, they …