This post is a guest blog by a person who doesn’t want to be named.

The two year period between January 2012 and December 2013 was a remarkable period in the movement of the prices of houses and apartments in Dublin. The period started in January 2012 with house prices dropping by -21.7% from a year earlier while apartments dropped slightly less at -18.4% and yet by the end of the period.

In December 2013 house prices were rising by 15.3% annually with apartments rising further to 20.8% annually.
Another feature of this period was the manner in which the prices moved, with house prices steadily slowing down their annual decline all through 2012 and from January 2013 to December 2013 having continuous positive increases in annual prices.

These increases were maintained to the end of the period. Analysts studying the price movement of houses would have noticed a steady single digit % rise in prices from January to July of 2013 which moved into double digits from August for the remainder of the year.

They could have confidently predicted that house prices had arrested their decline and were in a steady growth period. This would have been an excellent time to purchase if one could have secured a loan, however during that period lending for mortgages was limited and many transactions were on a cash basis with anecdotal evidence suggesting the figure was at least 50%.

However analysts studying the price movement of apartments would not have been quite so confident of predicting where apartment prices were headed. The annual % decline had been reasonably steady in its decline in 2012 until November of that year when suddenly the % decline increased again.

This pattern repeated itself in March 2013 when prices started to decline again for the next three months having increased in February. So it would have been a brave investor that would have been willing to purchase an apartment in Dublin during this period.

I have included a graph which shows the movement of these prices during this two year period. All figures have been sourced from the Central Statistics Office. 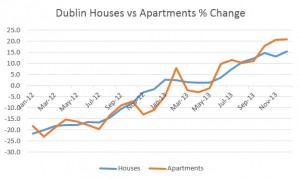