Firesale yields no flame and very little smoke: REA Auction in the Shelbourne 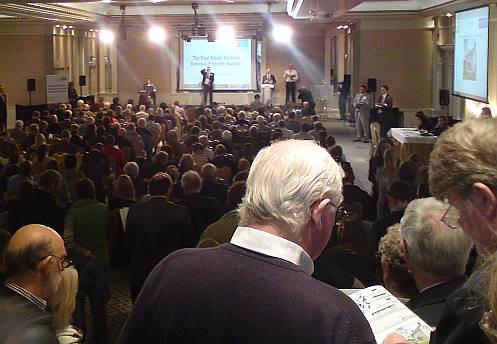 The room was packed and there was plenty of property for sale today at the Real Estate Alliance national property auction, however,  it seems the crowd was more curious than courageous [likely a good position to take!], and the over-riding theme was definitely that played by the word ‘withdrawn’. Of the 71 lots on offer about twenty were taken out of the auction in advance, and the majority of those that remained were attracting little interest and not getting anywhere near the reserve prices quoted.

In the time spent there we only saw a single property reach the AMV (advised minimum value) and subsequently sell. This is the bit that annoys me is this: on the brochure the AMV might be €350,000 so they start the bidding at €230k, one or two bids go in and now it’s at €250k but nobody goes above that so it is withdrawn!

If you are not going to let anything clear for less than the AMV why bother starting the auction at a point which requires any action on behalf of either side at a single Euro less than the point at which a sale can actually take place? This wasn’t an auction that represented an opportunity for a buyer to catch a deal, rather it was a shop window with a live performance instead of posters, we left early having seen enough.

REA would be doing their firm, and the rest of us a favour if they produced credible valuations but only allowed sellers in who would accept the result of the auction – then you could create a vibrant sales floor because people would show up in their droves in the hope of catching a bargain – and the more bidders there are the better it is for the seller, if you don’t want to accept the result of the model then don’t put your house into the auction, it’s really that simple.

The fact that the room was filled shows that there is still appetite and a market, the fact that nobody was bidding to prices that would create a sale shows that there is still a misalignment between what property is ‘worth’ (from a sellers point of view) and what it will actually sell for with live buyers bidding on it. Sadly, many sellers are still living in cloud-cuckoo-land, I believe they will get their AMV bids eventually, but they might have to hang around for a decade to do so.