What about those multipliers?

What do prices look like when considered from a GDP per capita point of view? (in advance I’ll let the GNP crew know that we’ll include that too).

A report from Savills in the UK looked at property prices there and asked if they were becoming more ‘standardized’ versus Europe. The graph below is from the report. When viewed from this perspective you might think that property prices here are undervalued (implied by the lower multiplier), of course this doesn’t factor in the supply, demand or anything else, it is merely using a reference point. The implications of this might hold in other countries, but from our perspective Ireland is a little different.

In Ireland the multiplier is far higher because of that GDP/GNP divide which is demonstrated in the following graph. 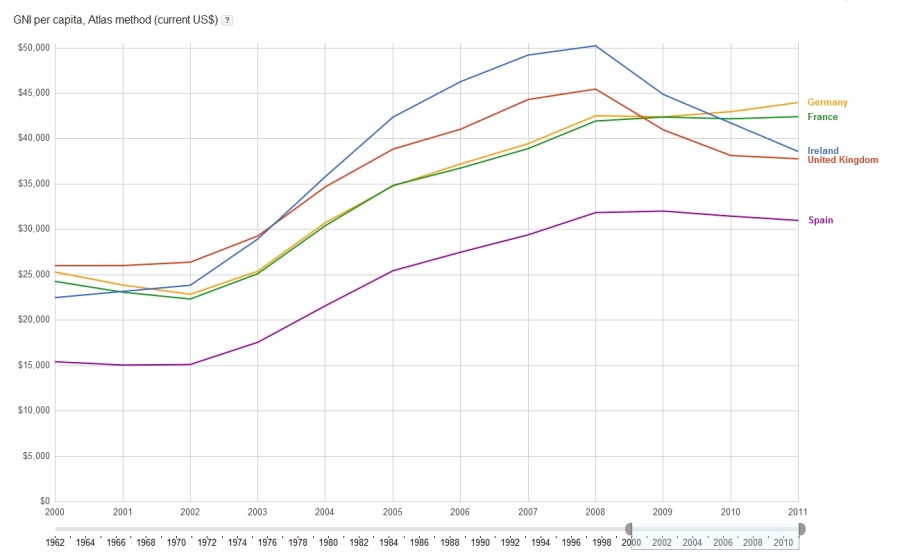 What this shows is that our multiplier is closer to 5.3 than 3.71 when you look at it from a GNP point of view. The average industrial wage is closer to the GNP per capita figure as it is in several of the other countries. Which means that the figures for Ireland are giving a bit of a false read, not in fact, but in inference.

That said, it doesn’t mean prices will rise or fall or do anything, what is interesting is that Italy and Germany have very high multipliers and yet their property markets are vastly different, Germany seems to have found that ‘just right’ balance of a steady market. Italy has had a different experience with highs and lows (but nothing like ours).

Suppose the main thing to remember is that house prices can be expressed as value or not using different methods, but the one that is the most sincere is using cash-flows to make that valuation!

GNI per capita, Atlas method (formerly GNP per capita) is the gross national income, converted to U.S. dollars using the World Bank Atlas method, divided by the midyear population. GNI is the sum of value added by all resident producers plus any product taxes (less subsidies) not included in the valuation of output plus net receipts of primary income (compensation of employees and property income) from abroad. GNI, calculated in national currency, is usually converted to U.S. dollars at official exchange rates for comparisons across economies, although an alternative rate is used when the official exchange rate is judged to diverge by an exceptionally large margin from the rate actually applied in international transactions. To smooth fluctuations in prices and exchange rates, a special Atlas method of conversion is used by the World Bank. This applies a conversion factor that averages the exchange rate for a given year and the two preceding years, adjusted for differences in rates of inflation between the country, and through 2000, the G-5 countries (France, Germany, Japan, the United Kingdom, and the United States). From 2001, these countries include the Euro area, Japan, the United Kingdom, and the United States.