Waiting to go bang. The need for new forbearance.

We have seen a new type of potential mortgage problem that hasn’t shown up on the radar as of yet, it’s with larger residential investors (typically 15+ properties).

The issue has started to show as a problem that will be a 2013 onwards one and it hasn’t begun to kick in due to low interest rates and ongoing interest only agreements which if changed will cause instant insolvency in the borrowers.

Take the following example, it’s very like a real case we just worked on.

Mr X has 20 properties, for the sake of ease I made the main sums consistent with the facts but averaged everything else to show how it works. 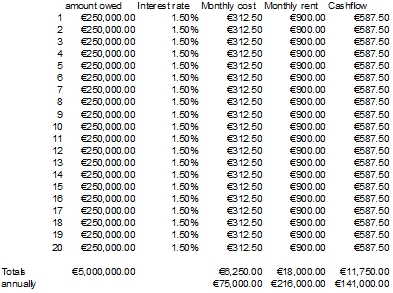 Currently it looks like a cash cow, in one of our recent cases it is because the person has section 23 properties that reduce the tax liability, but that puts them against a cash cliff in 2014 when it runs out. Put the s23 aside, the taxation of this portfolio would be approximately as follows: 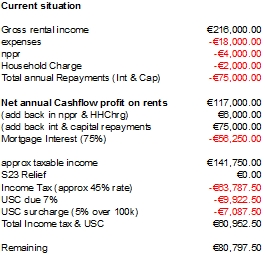 Not a bad living, but if (and it’s more of a ‘when’ than an ‘if’) banks look for any capital repayment things change dramatically, this person will go from a high income to instantly insolvent – btw: sorry for the crap resolution on the previous tables, my bad.

The repayments – even at these low rates would be €19,996 per month to service. That turns the €80k income into the following 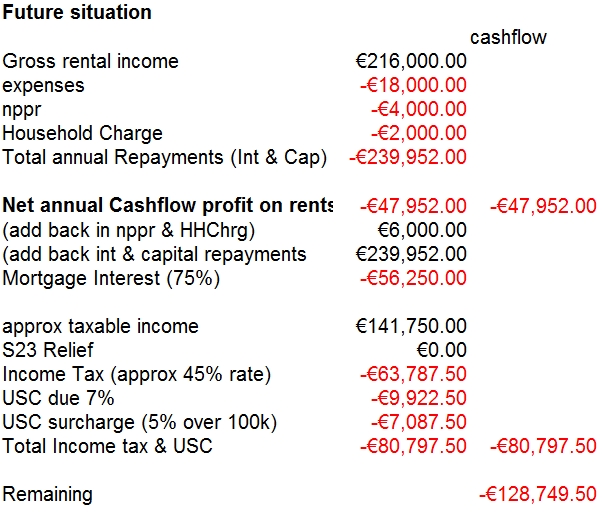 Where an 80k income turns into a 128k loss is a massive €208,000 change in fortunes. And all of this without factoring in any property tax (which is about another €5k of loss).

Think of the interest rate sensitivity this portfolio has even in it’s present form? How can the banks seek any capital repayment if it puts the person that deeply in the red? In short, they can’t, and so they probably won’t.

The only answer apart from liquidating all of these portfolios is a long term forbearance where the person makes partial capital payments and prays that the property market rises over time so they can cash out at a break even point, but none of those things are guaranteed, other than a lot of bankruptcy applications.

Something that may also be happening is that the people who know this cliff is approaching will simply take the cash flow and put it out of reach or spend it until it doesn’t work out. In company law it is illegal to strip assets (cash) but it isn’t on a bank loan, we may well see the investor portfolios worsen if banks lean too heavily on borrowers for capital repayments.