Repossessions in numbers: Ireland vs the UK

When we hear that ‘we have a low level of repossessions’ it is comparatively true. It may be devastating for the people affected (as are things like cancer, the death of a loved one or any other tragic event), but it is still a relatively low number when you look at the empirical facts.

Here is a graph showing the number of repossessions in Ireland vs the UK per 100,000 mortgages. This base is better to use due to population differences. And while it may have inherent skews due to borrower/lender profiles and the like, it doesn’t explain away all of the variation. 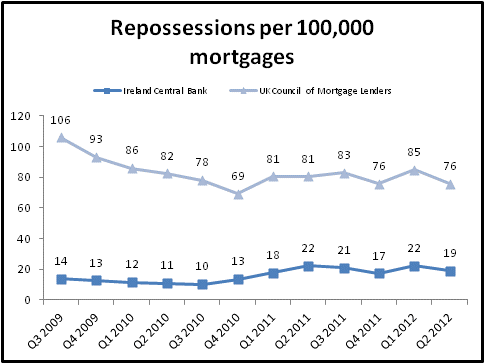 Out of the the total population of 4.49m people there are about 750,000 mortgages (covering 1.6m households). This means that fewer than 50% of households even have a mortgage on them at all. At least every second home can’t have a ‘mortgage’ problem for this reason.

We do have a mortgage crisis, it has been building for a number of years, but to think that this is all pervasive is only partly true, what we have done is avoid a problem to the point that it is far larger in one dosage than it should have been spread out over time.

Why does a country with only 20% more of a population have nearly 10 times the repossessions we do? We clearly have a bigger problem as well (higher unemployment, troika programme etc.).

Sometimes the evidence doesn’t fit the story, what that story is I’m not sure, but John Moran was factually correct when he said that we have an unusually low rate of repossessions.