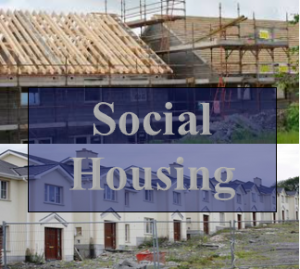 A developer by the name of Pat Crean has offered 36 apartment for social housing to a local Dublin authority. Pat Crean’s Marlet development group offered to construct the apartments for the Dundrum area of Dublin. The Marlet group comprises of one of two fast-track housing applications for the Dundrum area of Dublin. The other part of the fast track housing application is formed by the Crekav Trading GP. Crekav Trading GP has proposed to sell 25 apartments from its overall planned 253 apartments in Greenacres, Longacre and Drumahill house. These 25 apartments have an estimated cost of €8.346 million.

The 36 apartments have been estimated at a cost to construct of €11.8 million. Meaning that on average the cost per apartment amounts to €327,888. In comparison, the Crekav trading GP’s 25 apartments have an average cost of €333,840.

The housing crisis is definitely an issue as the issue in regard to the immense cost for housing can be shown through comparison to other countries. Social housing in the US would also be valued at a much lower price. However, housing issues relating to affordability of housing in the US also exists. The extent to which a massive housing crisis exists is definitely more prominent in Ireland than the United States.

The private sector of housing development will only help increase the supply of housing and help relieve the immense demand for homes in Ireland. The Marlet subsidiary plan is the most recent building proposal to supply social housing in large scale planning residential application under fast track planning rules. The addition to social housing by the Marlet group will help increase supply. However, such staggering prices for what is claimed to be social housing in Dublin is because their is such an immense demand for housing through out Ireland. As private sector building supply increases, social housing remains a key sector of solving the housing crisis.