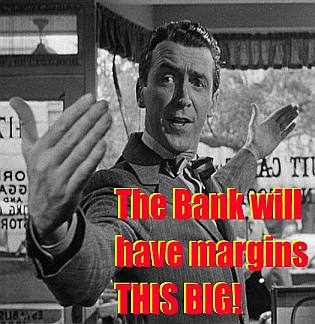 A highly debated element of the recapitalisations to date and the NAMA debate have to do with credit flow, that if banks are given money that they will start to lend it out, the problem being that we currently have a rapid credit contraction.

The new Financial Regulator Matthew Elderfield made his first public appearance since arriving nearly three months ago, and he said “A robust recapitalisation exercise will ensure that Ireland’s banks start this process in a stronger position and with a better funding outlook”. He is alluding to the thing that many people are forgetting, that when a bank has as high loan to deposit ratio they naturally hoard credit during times of widespread credit deterioration in order to ensure they have sufficient capital to face the impairments.

NAMA won’t ‘force lending out’, this is the aspect of fiscal policy not being able to ‘push on a string’, fiscal and monetary policy can pull a string and reign credit in but the force doesn’t work in the opposite direction, what it will do however, is get the banks to a point where they don’t fear impairment will undo their prospects in asset acquisition via loans. A bank is a little different you see, their assets are loans, but those loans can also act like a liability, whereas their deposits are liabilities, but these provide capital and therefore act kind of like an asset, banks are somewhat unique in this respect.

When a bank is in the region of 120% they are operating at very normal levels, NAMA will allow this to happen, and the recapitalisation will enforce this further, meaning the banks will be in a position to start lending again. It won’t force it, but any bank is generally keen to engage in the business they are destined for which is lending, there is no reason for banks to remain frozen once the cogs are in a position to start turning.

The one by-product of this will be repricing risk, this means (for you and me) paying more for financial services, in the UK after their property crash the margins on lending rose sharply, so bank will start to lend but they will do so charging handsomely for the privilege. It is a natural progression from a credit fuelled bubble, decompression of competitive forces won’t be good for the consumer, or for growth, but it will be good for banks, and necessary too, if banks had kept their margins the current dilemma would be better met by operational profit, and the bubble would have had some credit restraint (as stress testing based off higher mortgage rates would reduce accessibility to credit). It wouldn’t have saved us but it would be a different landscape.

Banks are lending, they are just doing so in a cherry-picking fashion, and they are looking to reduce certain channels (primarily intermediaries) first after which direct channels (branches) will start to get shut down, all said, there will probably be 30% fewer bank employees in the institutions of the future.