Problems of the Irish Housing Market 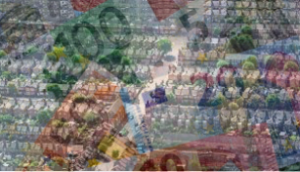 The Irish housing market has faced a drastic increase in price of homes over the last 30 years. Of course inflation has contributed to the increase of the cost of homes, but inflation cannot nearly explain the massive jump in prices of Irish homes. More specifically, costs of housing has jumped more than five times the cost of a home 30 years ago.

So what does explain the massive rise in costs of property prices? Could it be that increase in salaries contribute to the rise of price in homes? I know that the average income today is much higher than it was 30 years ago. However, the rate that average income has increased over the last few decades is nowhere near the amount that housing prices have increased.

The maximum mortgage loan a homebuyer can be granted is his or her average salary multiplied by 3.5. According to the Irish Mirror, the average take weekly income of an irish person is €734 per week. Multiply this by 52 and you have €38168 before taxes. Even income before tax multiplied by 3.5 amounts to significantly less than the average price of a home in Ireland. Thus, a major issue exists with housing. In other words, the average Irish person is unable to afford a home.

Because housing prices are extremely high relative to the cost of housing 30 years ago, it is significantly more different for younger generations to buy a home than it was for their parents. This is a major issue for Ireland because the demand for housing is rapidly increasing while the supply of housing has increased, but not nearly enough to keep up with demand.

Similarly, the price of housing contributes of massive increases in demand for social housing. More and more families and individuals are not able to buy a home or even pay their rent. This trend has cause massive increase in homelessness throughout Ireland.

So what does high costs of owning a home mean? People will not want to own homes. Homeownership has been declining due to social and economic changes. Millennials tend to indulge in less luxuries than previous generations including homeownership. As the cost of owning a home increases then home ownership will only continue to decline.