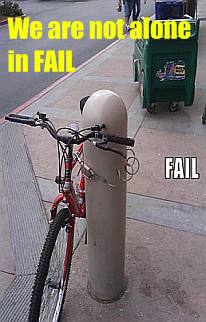 I read an interesting blog post about a company called Fusio who made an iPhone application letting people know where the new bike scheme points were around the city and how the owners of the scheme JC Decaux were threatening them with legal action – check it out here #dublinbikesfail (for those of you not on twitter that’s a way of marking a keyword in a post).

The issue I have is this: how is it illegal or legally enforceable to prevent a person or company from making an application that points out specific areas geographically? If I made an application pointing out rivers would Dublin City Council be able to take me to task? If I made on for the nearest McDonalds could I be sued? If you listed the nearest Dart station you are merely providing latitude and longitude of certain landmarks or public services, the bikes are payment to the public of a service in return for advertising space, so the supply of the service might be provided by one party but the actual scheme is run by another and its done on property owned by the public, it didn’t make sense….

So I rang a solicitor friend and was told it had more to do with trademark and other such issues. This is capitalism gone mad.

It’s public information and frankly, if I ran Fusio my first reaction would have been to send JC Decaux a GTFO letter. Location is not something you can copyright or own in terms of data, you can own a property but not the right to the latitude and longitude of it, perhaps it might be an idea to make a new app that points out the closest telephone pole to a bike station and people can go look at telephone poles (which happen to be near a bike station) and see if Dublin City Council make a song and dance about it? Once the object of focus is not the bicycles themselves or the trademark name then it would be up to the owner of the telephone pole to get bent out of shape.

A company like JC Decaux realises the power of ad-space, that is their whole business and it is likely that they will make their own application now with advertisements embedded into it, the real-estate passed to them in the initial deal (if I recall it was valued at c.€100m) is just part of it, this is the second tier revenue stream – but again, I don’t see how listing locations can be ‘owned’ by anybody.

JC Decaux should move their focus away from people making useful app’s and more on a remedy for their recent S&P writedown. The actual terminal text from two days ago read ‘JCDECAUX S.A. CUT TO BBB FROM BBB+ BY S&P S&P LOWERS JCDECAUX RATINGS TO ‘BBB/A-3′; OUTLOOK NEGATIVE, JCDECAUX S.A. CUT BY S&P.  JCDecaux SA (DEC FP) The world’s second-largest outdoor-advertising company had its long-and short-term corporate credit ratings cut one level by Standard & Poor’s, citing a lack of improvement in trading conditions.’

That is combined with sub-par share price performance. Ultimately I don’t think legal action against small companies pays dividends, perhaps its a mirror of the their stock which hasn’t paid dividend well over a year.