Where are interest rates headed?

While we often see opinions about interest rates given by various commentators, I think the most telling indication is often that of the market, the point at which rates are settling at in prices is available at any time by looking at the Euribor Yield Curve, below is the chart for today. 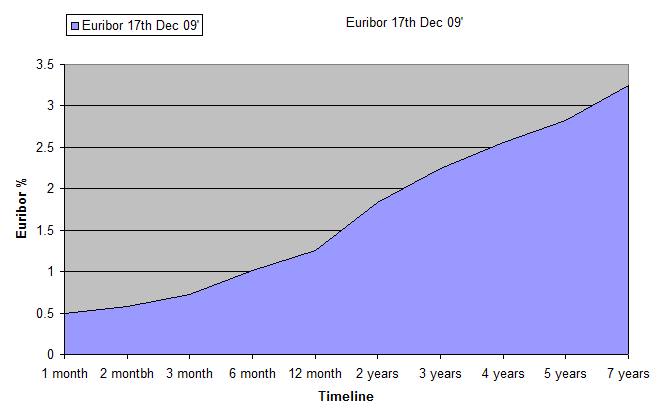 The idea that rates will probably stay c. 1% until well into 2010 is only partially priced in, you can see the yield curve crossing the 1% mark at 6 months (which would be May 2010) – this however, is the Euribor and does have margin factored in, currently the margin over ECB is c. 25 basis points so the 1% base would cross when the graph above is at c. 1.25%. and that is the part that brings us to the latter half of 2010. The yield curve is live and dynamic so it could change at any time, either flattening or inverting. The reasoning behind where interest rates are going is a science in itself, and one that many economists obsess over, I tend to just concentrate on the yield curve, accepting that millions of transactions give as good an indication of what may happen in the future as any other reading may.

What this means for borrowers is that (using the market as a compass) mortgage rates are probably going to stay the same for about 12 months, for those already on fixed rates you’ll notice no change, the same goes for people with tracker mortgages. The people who may see a change though are the people on variable rates – banks are going to increase their margin and this will happen shortly after loans start transferring to NAMA.

One of the issues Irish banks have is that of having higher costing funds, blended rates are exceptionally high given the base rate (blended rates: the average between funds obtained by depositors and the markets) and the only way to regain ground on that is to increase margin where available, contractually the only place this can happen is in the variable rate suite of mortgages. Hence you will notice that the banks are now offering fixed and variable rates only, the variables being determined on LTV’s most commonly.

So if you are on a variable rate it would be worth looking for a one or two year fixed rate for existing business (if you re-mortgage it could be far more costly) because staying on a variable rate leaves you wide open to margin hikes – PTsb has already lead the way, others will follow!