What next for Europe? 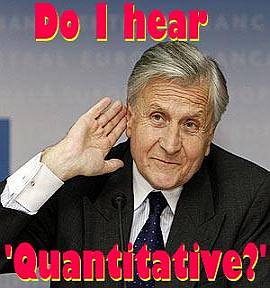 The Euro rose against the dollar as the Fed introduced quantitative easing, this will be furthered by the new TARP programme due to be released later today, Bank of England are also engaging in quantitative easing along with a near zero interest rate policy – one matched by both the USA and Japan.

So what will be the outcome for Europe? Essentially we will be forced to follow suit, rates will have to drop further and we will need to pursue in quantitative easing – via bond/paper purchases or otherwise. Why? Simply put, we cannot stand as an island in the global economy, we can’t stand as a continent when every other major economy is going to zero and going through what amounts to devaluation with increased money supply.

If the Euro rises too far against the Dollar or Sterling it will make exporting difficult (we’ll leave Ireland’s plight with Sterling zone exporters out of this for now) for large economies like Germany who are one of the biggest exporting nations in the world, the strong currency will help people to afford basic goods during a crunch but this will create rapid trade imbalances meaning we are only putting off today’s problem until tomorrow,  much the same as the current bubble was the result of putting off the crash/recession we were meant to have in 2002 – and take note, the delayed result is a bigger and uglier sister of the original so best to go through the motions now.

A strong Euro will facilitate eurozone deflation as imports become cheaper but in the long run we are likely to see the ECB take some bold steps and my personal suspicion is that they are waiting to see what everybody else is doing in practice before they implement their plan. Seeing how any programme works on the ground is a good basis from which to make a decision, as Yogi Berra said ‘In theory, practice and theory are the same thing, in practice they aren’t’.

In 2009 we believe that rates will fall further and some form of quantitative easing programme will be enacted, this might be done by buying commercial paper or government bonds but the ECB cannot continue to take the high ground while every other major economy does otherwise.