What is Negative Equity? 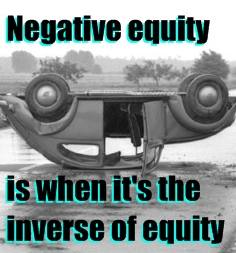 The easiest way to describe this is to first decribe what equity is. Equity in a property is the difference between the value of the property and the mortgage one it. If you owned a house that is valued at €300,000 and the mortgage on it is €187,000 then you have equity of 37.6%. or a Loan to Value of 62.4% (add your equity to your LTV and it will be 100%).

It means that you probably can’t sell your property, because to be able to do so would mean you have to find an extra hundred and thirteen thousand Euro with which to clear your mortgage. This means that a person who may have bought what they thought was a ‘starter home’ will now find that the same property has morphed into their ‘permanent home’ for the simple reason that they cannot afford to move from the property. 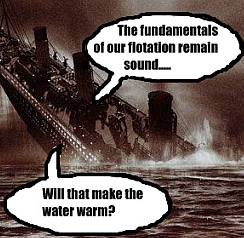 This is a harsh reality and one that has found themselves in negative equity has ever come to me and said they are happy about it, however, there are some ways to consider the position that will make it perhaps more tenable. Firstly, if you have paid more for a property than the value of it then you have basically given up a portion of your future earnings in advance for the purpose of occupancy of that property. The other factor is that at some point in the future the property market is likely to recover and put you back into the black.

There is a fascinating book by a man believing in ethical economics-Fred Harrison called ‘Boom Bust, banking, house prices and the depression of 2010′ and in it he puts forward the argument that it is land which is key to economies and rent as well as speculation on land which is at the heart of almost every boom/bust cycle.

This means that at some stage in the future that we will see prices surpass their high point in 2006, when is anybody’s guess, it may be sooner than we thing because one thing that is likely to come in the near future is a lasting wave of inflation. On a final note, something fascinating is that Fred Harrison was able to foresee with alarming clarity the coming fall in property and how it would play out, so when you hear people say ‘nobody saw this coming’ you can safely say, ‘yes they did, we just didn’t listen to them’. 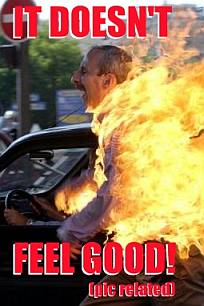 If you are in negative equity there is no simple way to remedy your situation, the thing that is frustrating is that the young people of Ireland are the hardest hit – in Dublin 50% of properties have no mortgage on them, these properties are concentrated in the older age brackets so to be in negative equity means that you were probably over 24 below 35 years, and you bought at some stage between 2004-2008. These are the same people who are most susceptible to getting laid off from jobs (one in eight below 25 are now on welfare) and they are also the people who are probably starting families and feeling the pinch anyway.

So in a nutshell negative equity is ugly, and people who find themselves in the position of negative equity don’t have a plethora of choices other than to sit it out and wait for the storm to pass. The short term upshot is that rates are coming down and with any luck people are seeing their monthly outgoings drop. The expectation is that rates are about to drop again according to the interpretation of statements made recently by Trichet.