What is happening with Irish Bonds?

With our bonds auctions making news (in the past bond auctions were dreadfully boring affairs) and the recent S&P downgrade on the nation I thought it might be useful to take a look at some charts. What I believe is happening is that nobody truly believes we will default, Greece wasn’t allowed to do it, the ECB is backing auctions where necessary and yield hunters are happy to lend at an appropriate price (thus the over subscription of the issuance). 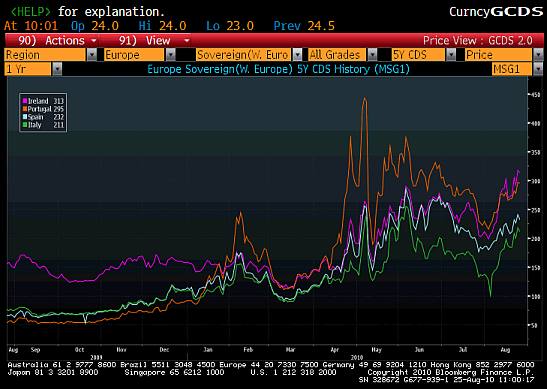 This is a chart of Credit Default Swap prices, the purple line is Ireland, Spain is white, Italy green and Portugal Orange. Often CDS’s are referred to as being an indicator beyond reproach, but it is important to remember that this financial derivative which is barely over a decade old is actually a barometer in the sense of insurance premiums, and the market is not infinite, so at any given time there may not be a matching number of sellers v.s. buyers and the prices go up, Irish debt likely has some of that playing into it – we already know that perceived risk drives prices up – just making the point that it isn’t the only thing.

Spain has been in terrible shape for some time, and unemployment at almost 20% yet we are trading higher, at the same time, Spain doesn’t have some magical recovery plan, and their banks are suffering (as are the Caja’s) but their debt market is far more liquid and has many more heavy players in it (such as Santander).

So it isn’t to say that default swaps are telling us the wrong thing, but rather that it is a reflection of many factors outside of risk of the underlying reference entity alone. We have also been trending in a loosely correlated pattern for most of the year with the PI(g)S. The end is not yet nigh.

The thing that does concern me however is the fact that the yield is rising on our debt. The thing I am looking at is the price of the bond. The yield (in blue) is the coupon (interest rate of the bond) relative to the price the bond is trading at. With a trading price of c. 93 (ie: it costs €93 to buy €100 of Irish debt) it is a problem because what people are actually doing is getting out of the trade and giving up future capital repayment. Remember: bond buyers are concerned about getting their coupon but above that is the concern that they will get their capital back. 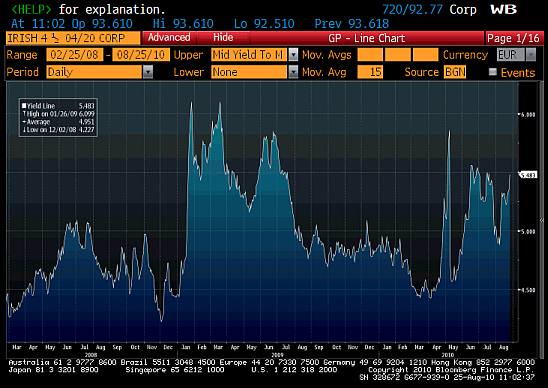 Why then were recent auctions over subscribed? For a start there was ECB intervention, but that doesn’t explain all of it, it goes a little further. When an auction is held the buyers place bids, and in doing so they have certain prices in them, the bond seller will then sell to the lowest bidders to the extent that a the whole issuance clears.

The over subscription is at least in part due to yield hunters who think that there is money on the table, the bids that do come in are already elevated given the perceived risk, in return this gives the jitters to people already holding debt and they feel at least party obliged to hedge and thus CDS prices trend upwards, or sell their position and move to higher grade paper: hence the capital value drops. It doesn’t always stand that the market can have fear of our debt, yields that imply risk and yet massive over subscription, somebody somewhere is getting the message wrong, the question is who?