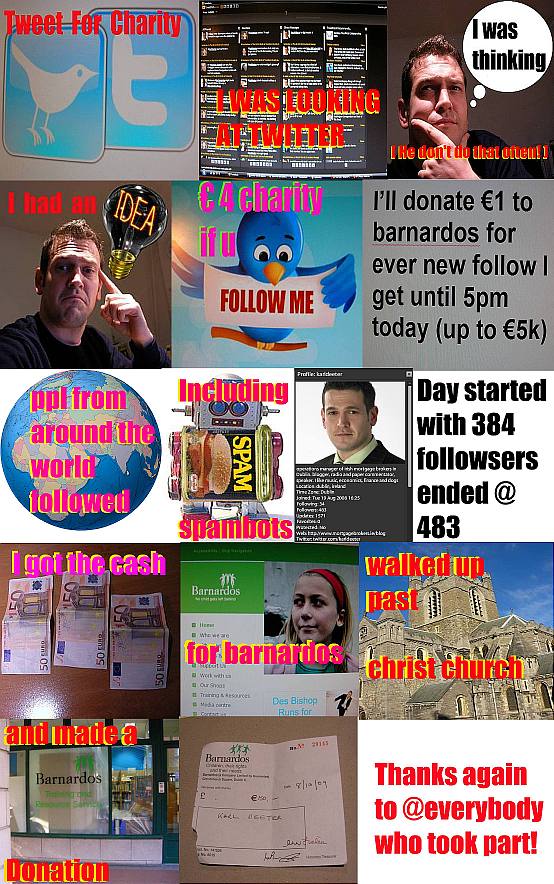 First of all- Thanks a million to everybody who took part! Your names are below!

By sending a RT/Via or clicking ‘follow’ ya really helped out, granted, we didn’t change the world yesterday but we may have changed the way part of it works in the future because it might help charities find a way to leverage the potential of twitter and the web to their benefit.

Well, it was a success in the respect that it raised €150 for Barnardos! [€87 was due to new follows] I was hoping to get hit for at least a grand, but I figure I’ll get there some other way with a new idea for next time, perhaps the next one will be to get lots of follows for a charity or some other worthy cause – actually, that’s an idea…. In keeping with the ethos of the ‘tweet for charity’ I’ll do this – the 1st tweet to me with a charity name once this blog goes live is the one we’ll go with.

Anyway, inclusive were the people who missed the deadline, I also felt that the pornbots/spambots were unusually quite and as they would have been counted too (query raised by @mneylon) so I put €20 towards the cause on their behalf even though they didn’t show up, and rounding it all off I’m gonna make the donation for €150 – I reckon if @desbishop got a hold of it that maybe a few others would have tweeted it and so I made an allowance for that and the fact that my mother isn’t on twitter.