Having been a contributor for three years to ThePropertyPin I was unceremoniously banned yesterday! In the past I had worked with the owner of the site to make a podcast, helped to contribute and create countless posts and then got the boot.

I was given the option (click image above to see full size version) of taking a different name and never mentioning my prior username or anything regarding my disagreement with the moderators of the site on the ban. I committed the cardinal sin of questioning a mod decision that was based upon some ongoing banter between me and a mod, essentially though, The Unwelcome Guest can give a slag but not take one.

What a shame, this used to be a great site and when many in the public domain had turned their back on it I stayed put. All of my final posts were deleted, but I screen-shot them for the sake of transparency. My farewell is below (click on image) 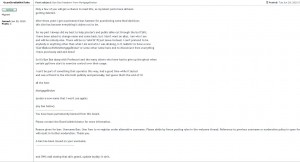 When you are given an option of ‘put up and shut up’ (email below, click to enlarge) the solution for some may be to accept it, mine is to shrug and turn away entirely, along with many other contributors I won’t be back. 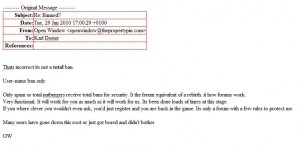 It’s a shame because several of the bans this week represent about 80% of the industry practitioners who contributed to the site, essentially taking away a professional base that existed there for free.