The name is ‘Bond’, ‘Failed Bond’, UK Economy ‘Shaken’, but not stirring. 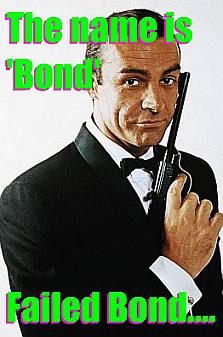 The UK had a failed bond offering last week and that is giving the world some indication of the state of the UK economy. They have failed in their bond auction, something that has not happened since the mid 90’s, the cover gap was 0.93 which is markedly less than the 0.99 cover failure the UK witnessed in the 90’s.

I think you can take this domino and walk through the path it might take. A failed bond means that the UK will have to offer more interest in the future to attract investors, how can you do this? Well, you can continue to print money (which they are effectively already doing), and this will devalue your currency (which is happening already). With a devalued currency and more money you can thus pay off the higher rates you promised in your bond offering. But how can you do this while keeping rates low? The only answer is if you are in a period of deflation, but that won’t save you, it merely ‘masks the symptoms’ for a while. Mervyn King knows that there is trouble brewing hence his very public quotes on the finances being too streteched to continue on the current trajectory.

The reality is that the UK is going to continue to print money, pay more and more for their bonds, they will do this until they get some inflation, and eventually they will (with their devalued currency) be exporting more and money will be (albeit less valuable money internationally) flowing again, then there will be a spike in inflation as the Bank of England struggles to un-ease (basically, when cashing in bonds etc. they won’t redistribute the money and this will reduce money supply). 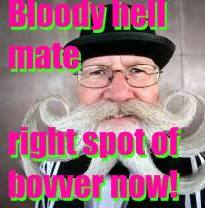 They will fail on some point, it might be down to the types of bonds they hold, or the convertibility of them, it may be due to the international aspect of their currency/bond purchasers, or of not raising rates at the right time, and rates will rise rapidly for a short period of time giving a secondary contraction. In historical terms it will be a remake of the period of 1975 to 81′ and we are likely somewhere around 1976 at the moment, growth will come but not in the way we want it to.

The USA will follow a similary route with the only advantage of hegemony to protect them (oil, gold, etc. are all priced in dollar and to buy them you have to hold/transact in dollar thus the USD is the primary reserve currency of the world) however, the anti-dollar (euro) will also face some risk and whether they opt to follow the other world economies is not yet known. If we opt for a strong currency we may be the ‘stable one’ and replace the USD as the reserve currency, or we may be forced to chase other currencies down the rabbit hole.

The question is this: ‘Who will Europeans sell to if our money is too strong?’. The reality is that -I suspect- the ECB are waiting for others to go too far or not far enough so that they can have a Goldilocks result of getting it ‘juuuusssst riiiiight’. Again though, that doesn’t mean the ECB will get it right. 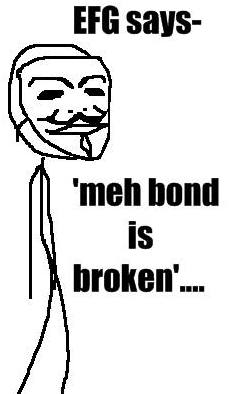 I feel for the UK at the present time, paying too much on your bonds will be a leading indicator of a weakened currency, it will cover your sales but lead to trouble later, paying too little will mean you have failed auctions and that will be disastrous as it can lead to a rating cut, this would lead to a torrent of money exiting the UK as treasury departments around the world evoke reserve rules.

Personally I favour the USD, not because I believe that American fiscal policy is correct, but rather that they currently hold the throne, and taking it from them is not simple, after that the Euro is my second pick of currencies that will hold domination.

The one issue that may go from page 23 of the FT to front cover of the world is that of a ‘new world currency‘, this is something being put forward by China and Russia and is a call ahead of the curve regarding the position of US Tnotes. Tbills are generally short range priced but holding longer term securities is a problem, and if the USA were to devalue then it would mean a catastrophic loss of money for surplus nations holding their bonds. The Chinese are in a perilous position, they hold so much US debt that they find themselves in a catch-22. Hold them and they might not be worth much, sell them at any significant level and you murder future values by surpressing current prices and exposing the bubble.

The ‘new currency‘ is a shot over the bow, a way of saying ‘we are serious’, but the fact is that this is a warning more than anything, the Yuan is basically tied to the USD and a new world currency would potentially hurt them, but it is a risk they are slowly growing to accept. They have to balance the risk of their reserves with the risk of their exporting ability.

2009 is likely to be a year of bad news financially, but the green shoots of over-inflation are starting to show in the current share price rally, it is also an argument against low yielding bonds, the fact is that ‘safe’ bonds generally pay less, but even if you honour your debts 100% a low real yield can be punishing and therefore money will find a new level exposing the sovereign debt market. AAA Corporates will find new investors and equities will too, the current rally is evidence of a taster of this.

The years in the near future are going to be rife with inflation risk, perhaps a global demand collapse followed by global manufacturing collapse will synchronise events enough that nations don’t face the possibilities mentioned here, but believing we have the ability to get the timing right requires a lot of faith, and that is in shorter supply than cash at the moment.