In Ireland each staff member of the regulator costs 23% more than the international average, their cost to the taxpayer is 88% greater and yet they have responsibility – as a ratio toward population- which is only half that of other countries (to be exact its 96% less).

If that isn’t enough, our regulators deal with 15% fewer firms in terms of the number of actual regulated firms per employee, yet it is 26% more expensive to regulate a company in Ireland than elsewhere, and in terms of regulator staff to financial services staff they are dealing with 17% less than in other countries.

We are overpaying for under-service, in fact, in only one other country does the tax payer foot more of the cost of the bill than in Ireland, and for that we get the statistics above based on the figures below. Angry? You should be. 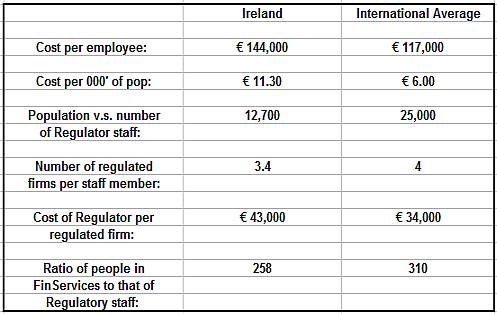 Cost per employee: In Ireland it is c. 23% more expensive for every staff member of our regulator than the international average

Cost per 000′ of population: The cost to our individual taxpayer is 88% more expensive versus the international average.

Population v.s number of regulator staff: Our Regulator staff have 96% less of a workload in terms of their ratio versus the general population compared to the international average, essentially they are responsible for half of the amount of people (per staff member) than regulators in other countries. For example, each French regulator has a national population ratio of 25,000 people to each of them, we have about half that amount.

Number of regulator staff per regulated firm: Our regulators deal with 15% less.

Cost of Financial Regulator per regulated firm: It is 26% more expensive to regulate a firm in Ireland (and we hope to grow a knowledge economy of which the IFSC is part of?!).

Ratio of people to Financial Regulator staff: Our Regulators cover 17% less people than their international peers.
Note: The Financial Regulator’s internal audit was the subject of an article by Charlie Weston of the Independent on the 7th of October, it was also covered in the Times today. We saw some of the figures from the report and thought it would be a good idea to put them in perspective.

The internal report was covered in a presentation on the 7th of September, this report is like kryptonite to any shred of faith many of us may have had in our banking and finance regulation.