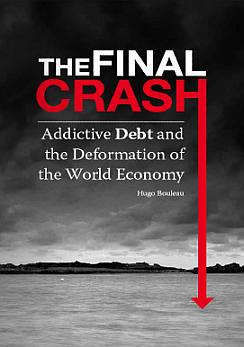 Hugo Bouleau’s (pseudonym of the author) book was for me, perhaps the most riveting reading of 2008. I like to underline important sentences in books, it’s a habit I picked up from a history teacher in secondary school. Looking back through ‘The Final Crash’ I can safely say I went through a whole pencil!

Bouleau writes the book not only from his practitioner experience as an asset manager for a large private bank in the Channel Islands (he is also a fellow of the Securities & Investment Institute), not only from his educational background from City University in London, but from that of a concerned citizen of the world who realises the core issue of the financial crisis, the one that remains largely uncovered in the day to day reporting, that of debt and leverage, in particular, that of irresponsible debt, and excessive leverage.

Bouleau has since changed careers, having recently started a Sharia compliant Islamic Finance operation. I caught up with him on the phone just as he returned from Saudi Arabia but before he took some time off in France.

I had the opportunity of speaking with Hugo today (I’m such a nerd that I got kind of ‘finance star-struck’!), my own psychosis aside, I found him to be a really affable character with massive dose of what you might call ‘British common sense’, his are pragmatic, not far different than that which an older relative might give you, he talked about the importance of not incurring too much debt and the problems with interest, money creation and other areas.

The conversation we had is outlined below, while it loosely covers many of the topics talked about in the book, the book itself is a wealth of information and poignant commentary, and certainly worth every penny.

Some of the things mentioned in the ‘Final Crash’ (written in 2006, published in 07′) have already come to pass, but it is the breadth of knowledge and tying together discordant worldwide occurrences as well as policy changes then putting them into a meaningful and understandable story that mere mortals can comprehend which is the true genius his work. ‘The Final Crash, addictive debt and the deformation of the world economy‘ is available on Amazon.

Hugo generously gave me a half hour of his time, some of the questions I asked, and his answers to them, are below.

Hugo, if you could take control of the world economy tomorrow what would you change?

‘There three things, first of all, a lot of stability was created in the Victorian era with the gold standard, but there is not enough gold now to go back down that road, gold would need to be trading at $40,000 an ounce to match the creation of money since the Vietnam war (i.e.: the time when the USA de-pegged from gold c.1971), the USD money supply has increased 30 fold since then.’

‘Secondly, in order to do that, we have to stop private banks from creating large amounts of money from small deposits, fractional reserve banking certainly has its downsides’. I wanted to know if Sharia compliant financial products were a solution (as he recently moved into this market), ‘Islamic banks try to mimic western ideas but they are not allowed to create money the way western banks do. Interest gets you a return due to asymmetric information, you don’t know as much about a company so you charge a ‘rate’ of return, and we base that on prevailing interest rates. However, a profit share might fix that, it is very grown up, and furthermore it is possible in an electric/digital age. It takes more effort, along with a change in perspective. The idea is that if you are doing work you should get paid for it, nobody has an issue with that, providing liquidity or infrastructure should come with a charge but benchmarking to an interest rate doesn’t have to be the way the charge is incurred.’

That struck me as quite interesting, why do we have to be slaves to prevailing rates? It creates massive peak/trough debt experiences, anybody with a variable rate mortgage knows how much their repayments have come down recently (and we see that as good yet we don’t’ see the disastrous economy which prompted the rate drop as good!), but everybody knows that this will be followed by an increase.

‘So we are stuck in a cycle where money creates money and private banks have a monopoly on money creation, Abraham Lincoln believed that governments should have the responsibility for creating money, and Zimbabwe is touted as the downside of this, but the idea is that if the state are creating money and they receive the tax base then there is no earthly reason why the state should pay interest, they should be the lender, not the borrower. People need help, governments want to help and stuck in the middle of all this is the entire banking system.’

‘You can throw bailouts at banks all you want and they will suck in capital and effectively atomise it, it is feeding the off balance sheet stuff that you cant see. They are trying to squirrel it away to provide a layer of protection. Existing loans that were packaged and sold on (via securitisation) leaving them with what looked like a clean slate, but you have layer upon layer of bad loans, and these are coming back to haunt banks via bond insurance etc. and when people need to sue somebody it comes back to the person with the deepest pockets which will be banks themselves.’

You gave a picture in 2006/07 of what the world would be like in the near future, much of this has come to pass, so what next?

‘I am actually very positive about the future at the moment, what we are going through is highly beneficial, sometimes you go down a path and a door slams in your face and it hurts, but the path we were on was destructive, permanent growth has no equilibrium, the very environment itself and much else was hurting, the high-water mark of the past market is now like a ‘scum mark’. You can actually have prosperity without inflation, equilibrium economically is possible, however, the contraction will still happen’.

A depression is by definition a 10% contraction in GDP, so Hugo is waiting to see ‘A period where not only the economy but stock markets stay flat. Almost everything wrong in our current economy seems to get back to the end of the gold standard’.

We talked about the recent equities rally that has taken place since March ‘this big rally is pretty classic, but was during the Great Depression that the biggest rally prior to this occurred’.

Do you believe in the transfer of power and wealth from west to east or is this merely a cyclical high for BRIC nations the same as in the 70’s when some were touting Brazil as the next world super power?

In previous decades it was western institutions lending to developing nations, so they started with shackles, countries with the highest IMF debt, incidentally, have the highest levels of deforestation, there is a correlation between western style lending to developing or emerging economies and destruction of those economies. Now these countries are the actual surplus nations. Lately, commodity rich nations are much less aggressive than they used to be in dealing with each other, the Chinese and Russians are getting along a bit more now, providing infrastructure projects for free effectively, the real wealth of the future is actual ‘thing’s, actual goods, such as commodities, not bonds and paper. The infrastructure approach means you are providing capital and helping provide for the future so you get long term benefits, the Chinese approach is more of a partnership (from a business ethic perspective not a political one).

The Guernsey Experiment – how do we make money that doesn’t cause inflation?

If you keep printing money for projects you add to the money supply, this will inevitably create inflation. The figures in the US stopped being produced (M3) in 2006 so it isn’t easy to measure it correctly any more (money creation) The velocity argument still holds credence, when you see charts of base money there has been a steady rise since the 70’s in the last two years it has gone straight up!

Any exponential chart, irrespective of what it is about is generally a risk, even natural examples show that, cancer cells replicating fast are bad, yeast can replicate rapidly and kill itself off (anybody who enjoys a pint has consumed the reality of that!).

The last time this happened was during the Weimar Republic, interestingly during the first 6 months the Reichmark actually got stronger in value, but is like a tsunami, things go one way then slam into the opposite direction. If you keep producing money it then its like ketchup in a bottle, you shake the bottle trying to get the ketchup out (credit flowing) then suddenly it all pours out at once, the inflation will come thick and fast.

Regarding Guernsey, they had money which rather than having notes saying ‘payable on demand’ they had a sell by date. A government bond has a maturity date, the Guernsey note experiment was done whereby the state or government would create the money for local materials and local people, at the end the debt would have to be cancelled, you create money to do a job then destroy it. When you strip interest out of the equation then it becomes a method of exchange (which is actually the original reason for money existing), and therefore money has no intrinsic value in its own right. It is only when money literally makes money that you have a problem.

But surely when it is coming to the expiration date people spend them like crazy and then cause inflation anyway?

Interestingly they didn’t, the state they would issue more notes on maturity if required, the money supply can be created or destroyed at will. By creating real money to finance real things (eg: town market, town hall) rather than speculative deals then it makes a perpetual income source. The more projects funded, the more rental income and then you have a permanent sinking fund to pay off past debt, you can go on to build harbours, schools etc. (as they did in Guernsey using this system).

During that time there were still private banks, and the local banks complained because they were being sidestepped. Funny enough, Government projects were capped at £40,000 but private banks could print whatever they wanted, but when they were not being used they felt hard done by.

What do you think of alternative currencies: freedom dollars, liberty dollars or other ideas in the USA?

‘In the big picture the use of precious metals is the best, naturally there is downside in the mercantilist effect of everybody going all out to accumulate gold, but as long as the mechanism is there it can work. On local level these things happen by themselves, in Germany during the late 1920’s/early 1930’s people used a local currency, Nazi’s stopped it when they took power. The likes of ‘Liberty dollars’ are a different story, the creators of them got arrested, its a little disturbing, it wasn’t harming anybody, it is clearly the IRS using bully tactics because they can, the founding fathers of america were real hero’s, they would not have agreed to that kind of approach.’
I would like to send a very large ‘Thank you!’ to Hugo Bouleau, not only for what was an epic and insightful read, but also for taking the time out of his day to talk to me and provide this interview.