The end of ownership 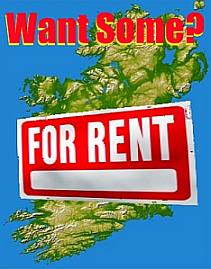 I had an interesting conversation with an Estate Agent recently who has been in the industry for over thirty years and he said that he felt he was seeing the ‘end of ownership’ in the young people today. That really got me thinking.

‘What do you mean by that?’ I naturally enquired, and basically he said that he was seeing a trend in young people not feeling any incentive to buy a house, not only in the short term but ever, ‘why would they buy, kit a place out and go to all the expense when they can just rent a place ready to go and any problem is the landlords?’ was his response. And one must admit that there is a large dose of common sense in that. Renting is no more dead money than mortgage interest is dead money, however, what it could mean for the future is that we become a nation of landed and un-landed citizens, which is ironic given that land ownership has played such a strong part in Irish history.

What would that mean? Would it mean massive landlord-tenent reform? The introduction of 40 year leases and the like? Or would it create an island in which some people are the haves, and others are the have-nots (even more so than we already have).

The massive oversupply in the market means that prices are likely to continue falling in 09′, the best outlook is for stagnation, the strong contraction in credit markets will exacerbate the situation. However, in any bear market deals are there if properly selected and well negotiated, having felt for several years that property is overpriced we now believe that strong negotiation can result in property with a good positive yield curve but in terms of a general ‘buy signal’ we still feel that the time is not right in general terms. The graph below shows house prices in the UK and when the pendulum swings too high it will equally correct to low when falling. What the graph does show is that prices strayed well above the mean. 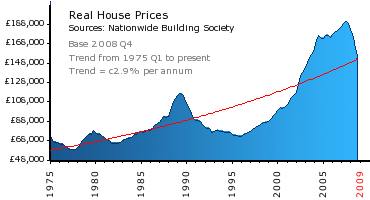 If we do see a nation where renting becomes the norm rather than the continuation of the c. 80% pattern of owner occupancy then what will be the opportunities and the risks associated with that? Firstly, the landed members of society have (in financial history) always fared better in the long run that those without so property is still an important element of an investment portfolio – take heed ‘element‘ not ‘all of‘! The ability to use property as collateral is still alive even in the midst of the international credit crisis.

The future prospects for builders and developers do not look bright, many are bringing property to market in 08′ and 09′ that was built with a 2006 cost base (the price paid for land/labour etc.) meaning they will have to sell below cost and ultimately go bankrupt. The one saving grace is that many developers have each development held by an individual company so the profitable jobs will hopefully remain and sell and the bust will occur on those that held no hope, while painful for bank balance sheets [in particular the likes of Anglo, and thus the Irish tax payer] it will stop a cascading effect with every developer, the ones who did not use such methods however will be open to the most catastrophic adjustment. 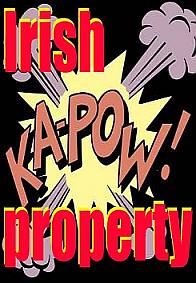 This means that property investors [and even in this market there are investors at the right price] will need to get back to many of the foundational reasons for investing in property, firstly yield must retain its rightful place rather than capital appreciation. Capital appreciation is hoping that the the market will do the hard work for you and is also the reason for development in small towns that had no infrastructure to back up the development. Yield was always king and always should be, determine prices not by looking at the asking price but rather the yield price you are seeking.

Location will also be vital, amenities are necessary and an ability to control associated costs as well as interest payments. We would strongly advocate the use of longer term fixed rates when rates are as low as they presently are, this will fix repayments – again, if you worked out your yields correctly with this factored in then you can still create cash positive deals- and give the desired return on investment.

If, as my colleague said before, ‘ownership is dead’ then it is vital to determine how the property market will morph due to this, suffice to say living under a roof is set to remain popular, the question is not about property itself, but more about finding lasting value at the right price, the lessons of the boom have been learned in the most destructive manner and for that reason it is vital to adhere to traditional rules of investment in the future.