The emotions of investing – Tanker shares

I have always liked shares, learning about them, finding out what various companies do and trying to spot trends, it all goes back to the time I spent in Chicago, I worked at a bar next to the board and many of the clients were options traders, then of course the annual stock traders convention was also hosted on the south-side at McCormick Place and apart from loving to drink those folks loved to share information, in particular with barkeep schmucks like me, because most of the highly successful traders didn’t have degrees from MIT or in some cases any university at all, most of them were gutsy practical types who read situations and made a call based on their belief, the kind that Krugman talked about in one of his recent articles.

Anyway, I still base a lot of investment decision on gut instinct, the technical analysis tells you certain thing, and for traders who can watch the hammers and candles all day that’s great, but for a long buyer awaiting trends I don’t often get into that, and I like contrarian buys, I tend to only be interested in a stock after everybody talks about what a dog it is. Which brings me to oil tankers, many traded at levels of over ten times their current prices, below is the 5 year for GMR who I got into in a big way last year. 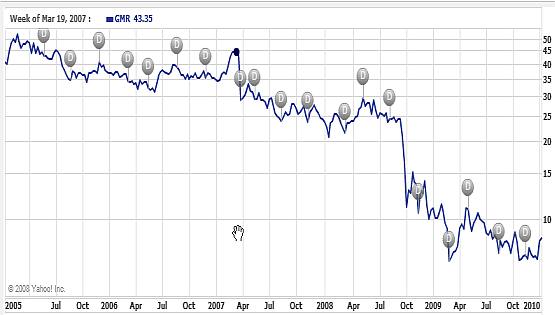 They have never missed a dividend payment, and were over the $50 mark, then as oil prices dropped from their record highs and recession took hold suppressing consumption oil tankers stocks dived. It was as this happened that I started to look for fleets that had good aframax/suezmax double hulled fleets. I also think that as water becomes a fully fledged commodity over time that tankers may carry potable water too (but that’s a side issue). Anyway, I got in on a dip at $7.33 figuring that dividend would still be paid, with the natural likelihood of a reduction. 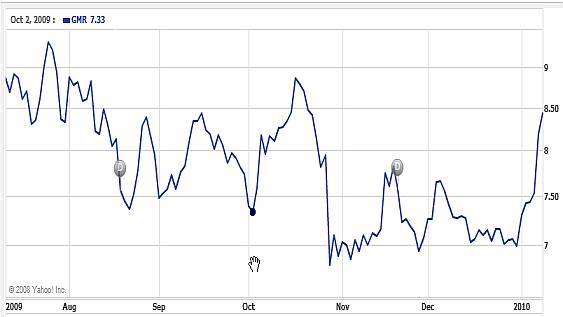 The trend I was looking for was a company out of favour, that had a share price that hand tanked (forgive the pun!), but that was maintaining dividend, GMR fits that bill. Then you have to remember, the world still runs on oil, planes don’t cross the Atlantic on battery or wind power, so oil will be with us for some time, any recovery will be seen in oil prices – the oil price recovery was well under way so that box was checked, a full recovery will mean OPEC have to ramp up production that they had been cutting back on. That hadn’t happened, but what had happened is that chartering prices were at record lows, Baltic tonnage prices were through the floor, and that all meant that oil tankers were in the doldrums but not likely forever.

I had discussed this with a commodities expert from Blackrock and he laughed at me saying we wouldn’t see tankers recover for many years as there were too many on the water, that meant institutions didn’t like tanker stocks either, for me that was the final buy sign.

The emotional aspect of this was that I had to ignore the fear of loss, I felt going in that (I bought a few other tanker stocks too) that one of them would go bust, I’d lose everything etc. the normal set of emotions, then prices shot up pre-dividend – normal as people pile in for the ex-div date, but then things went south which I didn’t think would happen, all was lost, it depressed me a little to be frank, then there was a roll along the $7 mark.

Trend buys don’t always pan out quickly, but it seems that for now things are looking up as analyst houses have all started to say ‘buy oil tankers!’.

I figured I’d be well into 2010 before any hope of breaking even, but it seems profit came early, the lesson I have learned from this is that of belief, or faith, when you make a call your natural bias is to think that you are an idiot compared to the world of analysts out there, but the truth is that a company with a decent balance sheet and a reason for profit is as good a bet as most money managers make – albeit they may have more information, they rarely beat the market all the time year after year. The lesson I also hoped to learn was the difference between belief and hope, I believed in oil tanker stocks, whereas I can only hope that Elan trades higher (bought after tysabri fall out – I still think that Elan are an ultimate IP accumulator and will bounce). It may be premature to say ‘I’m up 15%, therefore this is a great long term trade’ but that isn’t the point, the point is that the factors which will drive future profit are starting to align, and this is (in my opinion) a tipping point toward a stronger share price.

Anyway, there are a host of emotions that you should look at in yourself, do you invest? If not then why? Are you afraid? Do you choose not to for a certain reason? For many people it is a mistake to invest in shares at all, they are simply not suited, or affordable etc. but if you do save money then it is worth checking out your own bias surrounding different aspects of it, and learning to rationalise that bias and to change your view because if you can do that you’ll learn to truly master objectivity, and that is perhaps the greatest investor trait one could ask for.