The day we all became state tenents 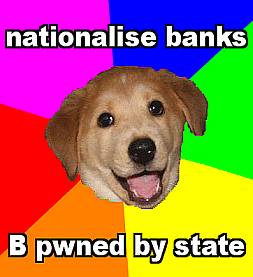 It may be beyond bearing to think about what I am about to describe, but there is a possibility [in Britain first later here] of everybody becoming a state tenant. A person who pays their rent/mortgage to the state, and this can actually come about via widespread nationalisation of the banks.

It is a wild thought, but don’t weed this one out just yet, having spoken to several contacts across the UK I am satisfied that many people there fear this may be an eventual possibility. If the state (be it the UK, USA or anywhere else) go the route of mass nationalisations then the mortgages held by banks will literally become ‘state loans’. This could result in the state becoming a ‘landlord’ or in them being the entity with the first lien on your home.

If the state were to alternatively leave the profitable part of a bank running and instead take only certain mortgage related assets then the same thing could happen. People constantly say ‘don’t throw the baby out with the bathwater’ but ponder this – what would be the problem with trying it just once? Why not let one of the banks who are not surviving face the fate that inefficient business must face if you are a capitalist?

In any case, the ongoing efforts by the UK to prop up banks will perhaps end in more nationalisations, and if this occurs then eventually the state will be left to carry the can. If you can’t pay your mortgage what will happen? Do you instead opt to become at tenant? Renting your own home? Or do you hand it back? Or get repossessed with a grant to remain in the property?

The world is really going through some monumental changes now, and where this will all end up nobody knows, but I would feel there is genuine threat in parts of the western world for the financial system to be gobbled up by the state – albeit in an effort to save the rest of us – but with the end result of total state monopolisation on the financial sector which would arguably be a fate worse than that which we might have faced anyway.