The best monetary decision will be that which is taken 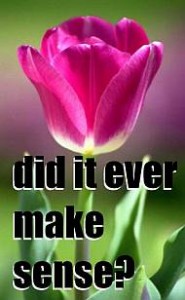 I have looked back at market crashes, the Dutch Tulip Bulb crash, the Railway crash in the USA, the Great Depression, the Oil Crisis in the 70’s, The 1987 Stock crash, the S&L crisis, the dotcom bust and our most recent and several things have become clear.

The ‘solution’ is whatever was done at the time thus meaning we try to find the answers of tomorrow by looking back at what worked in the past and applying it to the new situation, it is one of the most basic human methods of learning. Children will get a burn from a fireplace once and it is then engraved in their minds that fires are hot and can burn you. Thus we see the same happening with monetary policy and with businesses.

The question though is this: What if what we did in the past was wrong? Does it make a solution that appeared to work relevant? If for instance I was the sole solution provider for the Great Depression and my answer was to wear only pink suits and laugh out loud in public (this example is intentionally ridiculous!), and at some stage the Depression ended then arguably I may have found ‘the cure’.

This might seem stupid but it is being done for the sake of example – the solutions we have seen in the past are not necessarily the answer for the dilemmas of today even if they appeared to work historically.

This is where we get into my personal area of concern regarding the bailout packages being offered by governments throughout the world (although mainly in the EU and the USA). Monetarist solutions might work, but they can equally drive high inflation which destroys savers and rewards borrowers, mass intervention might work but we underwrite the whole nation for the sake of banks that are willing to socialise losses when they were never willing to socialise profits.

What we are witnessing today is the end of a credit bubble, if you look past all of the justification for bailouts and ‘crisis solutions’ then perhaps we can see that the true ‘cure’ is to avoid bubble creation driven by low interest rates rather than to concentrate on finding medicine to treat symptoms created by them.

Which is why, when the dust settles and certain people will be deemed as having ‘saved the day’ that in my lonely capitalist corner I will still have to say – it somehow worked, but that doesn’t mean it was the right solution, the one that would have served society best.