Spin me right round’ – some thoughts on IBF data

In statistics there are two key components, the first is the actual ‘data’ the second is the ‘inference’ or what the data actually means. If you saw that one summer was hotter than the last by collecting daily average temperatures that would have statistical significance, if on the other other hand you saw that July was 56% hotter than January then you’d be stating the obvious and your ‘inference’ would be laughable.

That we can see this when it comes to meteorology is obvious, and almost nobody would take such news as having any significance, but when it happens in finance it can go unchecked although Eamon Quinn at the Wall Street Journal caught the IBF out on their release which is about mortgage lending being ‘56% up this quarter’.

Here’s the actual quote they lead with ‘The latest figures from the IBF/PwC Mortgage Market Profile, published today, show that the number of new mortgages issued in Q2 2013 has increased by 56.1% on the previous quarter.’ And it is, simply put, total bullshit in terms of statistical inference.

Pointing this out is important, and we are not above it ourselves, I recently said that July seemed ‘brisk’ in terms of transactions, Rob Kitchin from NUIM kindly pointed out that this was nonsense,and then we kindly rebutted, but at least there was sensible dialogue and reasons for the initial statement. (Rob also has a post on the mortgage data) 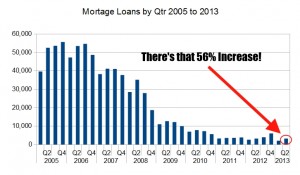 On the other hand, the IBF headline reads like total spin and not much more, while it is a reflection of ‘actual true data’ it’s telling a narrative that is patently false. There is seasonality in draw downs, that has been visible for a long time, the truer reflection is Q2 of 2013 versus Q2 of 2013 and when you look at it that way there is only a 0.1% growth in the number of loans. Take a look at quarterly lending in general (graph below), then down on the right hand side, do you see those two tiny little columns? Notice how the second last one is really minuscule compared to the tiny last one? That’s your 56% increase right there.

What about the growth in terms of the value of the loans? Again, it’s an impressive 56%! Isn’t that wonderful news?  Sadly this is again a façade for anaemic lending levels, while loan growth did ‘rocket upwards’ from Q1 to Q2 it is clearly visible (2nd graph) that there is some seasonality involved, because loans by gross lending were higher in the 2nd quarter versus the 1st quarter in every single year on record, no exceptions. 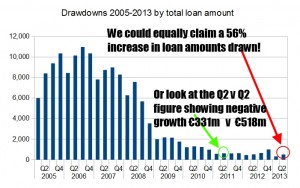 Saying that money lent in Q2 was 56% higher would equally be a meaningless narrative, but what does relevance matter when writing headlines?

The banks collectively pledged about €4bn in credit to the Irish market in 2013, that figure comes from adding together all of their projected lending figures which came out around the turn of the year.

Here are some of those headlines: PTsb to increase lending fivefold (mortgage portion being €350m) 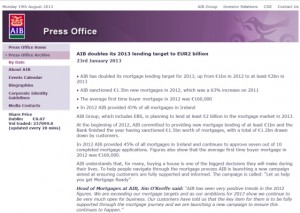 Bank of Ireland (whose new moniker is of being the good guys because they aren’t state owned – despite needing €3.5bn of taxpayer money and having soaked their shareholders in a sham of a rights issue [twice]) say they have €2bn ready to loan in a fund.

None of this takes into account any plans by KBC, Ulsterbank or Danske.

Now, back to reality, square this with the lending to date, thus far there has been €849m of actual loans.

As a brokerage we are really looking forward to a busy second and third quarter as we lend in the region of €3.6 billion Euro or almost 4.3 times as much as we have in the year to date.