Should the regulator get involved with mortgage pricing? 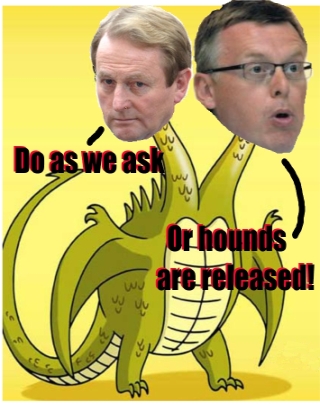 We touched on this topic over on MyHome.ie last Friday in our weekly blog contribution to their site.

It is important to look at this from a few perspectives

1. Regulation and the role of the Regulator: The idea of regulation is not for price control, rather it is about prudential control. As galling as it seems to everybody, the Financial Regulator is not (nor should they be) empowered to tell banks what prices they can charge. This is sickening given that we have spent €10,000,000,000 this year alone via the NPRF in supporting our banks (€8.8bn to AIB and €1.2bn to Bank of Ireland).

Readers, if you know of other jurisdictions where regulators set prices please let us know! The idea of a Regulator is that you pay for them in return you get the avoidance of systemic risk, that is the fundamental reason for their existence and for bearing the cost of having them. The same way that we pay for police in order to have a safer society where there is consequence of actions.

That our regulator has failed and was unfit for purpose is a given, however, placing new powers in them that can force banks to charge certain prices is utilitarian – where the end justifies the means – rather than fair and prudent. If we are to sell our banks they must be profitable, higher rates are one route to that (the others are dropping deposit rates and firing staff).

No investor will want to buy an Irish bank if they cannot control their own pricing, even if pricing is controlled and certain promises given or undertaken not to meddle in the future, the first time you do so it destroys your credibility. And that is where Government erred. They thought that the warning of a stern telling off would make banks change their ways.

It failed, leaving the Taoiseach with egg on his face and the banks with a reputation as bad as ever, while the ball is now in the Regulators hands as they were asked to ‘let the Government know if they need extra powers’.

[Irish Times] “Mr Elderfield has previously stated that his powers of intervention are limited when it comes to forcing the banks to pass on mortgage rate cuts. The Government’s legal advice is that the roles of the regulator and of the Central Bank are independent and the Government cannot direct him to take action.

A source said it has instead “invited” him to consider the outcome of the meeting and, if necessary, make a request to Government for additional powers.

Mr Gilmore denied the Government was powerless in the matter. “No, this has some way to run yet . . . we will take further action if necessary,” he said.”

2. Past decisions by the Regulator: It is interesting to note that the argument about rate setting has already been raised with the Regulator, only it didn’t make headlines the last time. The complaint was via the Professional Insurance Brokers Association and the basics were that ‘dual pricing’ (where prices vary according to distribution channel) was wrong and should be prevented.

The regulator said and did nothing about this, their return comment was that ‘The Regulator has no input into pricing by banks’. So if that precedent is anything to go by then they will not intervene this time either. And that is the key issue- Kenny has passed the ball to the Regulator and now they will be the ones to be made to look bad by appearing impotent. Or worse yet they will seek powers that will make the financial services vista even worse in Ireland.

If the Regulator does get involved in pricing issues it will open a larger can of worms than presently expected, next of all people will dispute their TVR’s based on LTV’s, brokers can bemoan dual pricing etc. etc. It is a downward vortex when you make a Regulator responsible for pricing.

3. Politics and Policy: It is not disputed that people are unhappy, upset and morally outraged at banks getting a cut in cost and not passing it on. However, this is primarily perceived rather than real, because banks are paying more for money than they have existing loans out at (for the most part, and largely due to the 400,000 tracker loans out there).

The question we are asking though is ‘what part of politics requires price intervention?’. The natural byline is ‘well we had bank intervention?’, that that is true (we made a mistake in how we did it, a big one), but mistake ‘A’ is not a justification or foundation for Mistake B if you operate on a rational case by case basis. Furthermore, the likes of AIB who are ‘the bad guys’ are still more than 2% cheaper than PTsb who did pass the rate cut on! So should politicians risk any political collateral they have on diving into this?

Why instead are they not fighting the most expensive providers and asking them to come in line with more competitive banks, this ‘pass the rate cut’ is all about the appearance of power, and the flexing of muscle rather than about genuine leadership and policy, sadly it would seem that our leaders are willing to spend considerable equity in optics when the results are unlikely to be forthcoming.

Perhaps the most pertinent question is ‘what are they hoping to achieve?’.