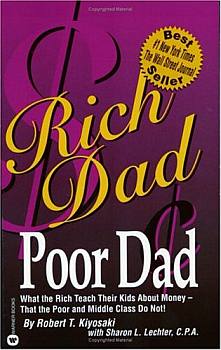 I read Rich Dad, Poor Dad in 2001 (very belated review!), on the advice of a guy I knew when I was working in Bridgeport on the South side of Chicago. He told me a little about the story and it was one of those times where the referral from a person worked better than any promotion could have.

Richard Kyosaki’s book is a must read for those who have wealth accumulation on their list of aspirations, it is however, a book that is as much about mindset as anything else and in that respect it would not be considered a ‘wealth for dummies’ or ‘how to’ guide.

Rich dad poor dad basically takes a look at Kyosaki’s upbringing in Hawaii (most of us would have been happy with that alone!), his own father was a teacher, and he had a certain set of values and thoughts on the topic of money (his own dad is the ‘poor dad’), then there is his friends dad, who was a serial entrepreneur (the ‘rich dad’) and one day he catches Richard and and his friend hammering out zinc toothpaste tubes with a view of selling them for the value of the scrap, he offers to take them under his wing, and in return for hard graft he would teach them about business.

I don’t know if the book leans on artistic licence or if it is purely fact based but the journey through the eyes of a kid growing up and the basic lessons about wealth are certainly easy to read and easy to understand, this book was done and dusted in about three days if I recall correctly.

While it is absolutely not an academic book, Rich Dad Poor Dad is well worth reading if you are a person who wants to get motivated regarding your finances (success stories are always good for that!) or you could buy it for your kids to give them some basic lessons, I think the book would be lost on anybody below age 14(ish).

One of the downsides of the book is the emphasis on Real Estate, anybody who went in up to the gills (and one of the central tenets of the book is about owning property) would have likely experienced a particularly painful contraction in their wealth, especially as the book came out around the time property had started to boom.

All in all Rich Dad Poor Dad is definitely worth reading, I’d give it an 8 out of 10 as far as a business/money book goes, it is easy to read and understand, it is well presented and achieves the goal that many general money books fail to achieve, that of being a book you will actually finish reading.

Edit: I got this link on twitter from @counie  of a different review of this book and it is a polar opposite to my review, for balance it should be included.