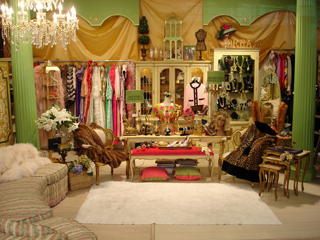 In the USA they have a type of shop called a ‘Consignment Store’, and it is a retail premises, like many others, with the exception that it doesn’t ‘buy’ its stock, rather it takes in items that people want to sell and puts them on the shelf, kind of an alternative to eBay, because some things are better sold in person (for instance: musical instruments are impossible to gauge over the web). And to date I don’t know anybody who sold a suite of furniture via eBay. Typically they will stock athletic gear, clothes, books, antiques etc. but unlike an Oxfam which relies upon charitable goods (donated), in a consignment shop the provider of the stock is going in on a profit share basis.

If you had an xBox (for instance) or a t.v. that you wanted to sell, you could put it in a consignment shop, the person there sells it and you do a profit split. With retail space getting cheaper by the day I think it is only a matter of time until somebody opens one. They can specialise, designer clothing (for instance) that was only worn a few times, or what about unused/unwanted presents? Wouldn’t it be nice to have a place to sell them?

Not all of the goods need be given in by people looking to sell something, a shop owner can sell their own product as well, or spend part of the day bidding on the likes of eBay and on the great deals they win they can then sell via the shop. It seems highly inefficient to those of us who are comfortable using the web to buy things, but if the web was where it is all going then it would be there, I’m not trying to say that web sales are not going up [I can’t remember the last time I bought software that wasn’t delivered over the web – kudos btw: to Steam Games!].

For so much else we still often go to a retail outlet. A consignment shop could occupy some unwanted retail space, create some funky shops in areas that are otherwise going downhill, and help people who are tight on money to both realise income from things they have and want to sell, as well as find deals. It may even be a case that you could trade certain things in or out of a consignment shop.

The main barrier to entry thus far is that thrift took a while to become popular again, and of course commercial rents in the city, which have been prohibitive. There are plenty of shops that might buy something from a person (second hand games for instance), but none that I know of thus far who’s primary stock is that given in by people. In return for selling it the shop owner keeps part of the proceeds and so does the seller. There is an internet based one in Ireland but that doesn’t give the walk in ability nor can you buy a set of weights at it.

Anyway, its an idea that we might see sprout up as the recession continues to bite and people look for bargains, the question is who will do it first!