There was an interesting post on ThePropertyPin that I came across on twitter and in reading the analysis I was struck by the statistics mentioned regarding the rent supplement.

For a non-landlord, hearing that ‘rent supplement’ is above actual rents must seem like lunacy, heck, even for a landlord it sounds ridiculous. In particular when the average is 7% above the general asking prices according to the piece. But taking this post on the face of things merely circumvents the truth within the figures.

In fact, in many instance there are several factors at play, such as a local authorities inability to accept ‘asking prices’ as the real price, where these figures are negative it demonstrates that they know the asking price is not the ‘clearing price’ and therefore they can offer the client (rent supplement recipient) far less than that which is dictated by the market.

For instance, in every case given, Leitrim is not giving people enough to rent a property and its the same in Longford. In Longford the average of -22% of the asking rent is not there to make people homeless, rather it is the clearing price for the properties and it is working in terms of getting tenants into good quality buildings.

Am I sure? Yes, because a call to the housing department in Longford County Council verified that (just needed to double check!).

Now that we have debunked the fallacy behind some of Ireland’s worst counties when it comes to property stock why don’t we look at the shocking examples of overpayment which would justifiable whip people into a rage.

A 17% premium in Kerry on a one bed apartment becomes only a 2% premium if you go to 2 or 3 bed apartments. And let us not forget – every example given is for apartments, not houses. How many 1 bed apartments are there in Kerry versus the people who want to live in them who are on rent supplement? If a couple in Kerry lose their jobs do they move to a major urban area to look for work or stay put?

How many owners of 1 bed apartments are in the tourist letting business in small towns rather than the local welfare receipt business? These things don’t translate across, if they did you wouldn’t see such a drop in the premium on 2 and 3 bed apartments.

Wicklow demonstrates the same thing, Wicklow 1 beds command a 25% premium according to what is on the PropertyPin, but think about this: if you are getting money that you don’t have to work for then why would you opt for anything other than the maximum quality you could obtain for the allowance given? Add to that the cheaper properties are not in good locations and welfare recipients don’t all own cars so they need to be close to public transport and that means getting a really good 1 bed, not something halfway up a mountain, if they have children there are also minimum standards that must be met.

In fact, under the housing act changes of last year the local authorities actually carry out inspections now for properties that are to let and if it isn’t up to scratch you can’t rent it to a person receiving rent supplement, so it implies that standards must be kept high and therefore the cheap properties might be eradicated instantly.

Even this flood prone property in Bray is more expensive than the price given as ‘proper market price’ in the comparison so there is perhaps some ‘figure massaging’ in there too.

The majority of 97,000 recipients (people or households) on Rent Supplement live in major urban centres, namely Dublin, Cork, Galway, Limerick and Waterford, something I verified with a senior civil servant in the Housing Finance Agency. Looking at those areas you see the following: 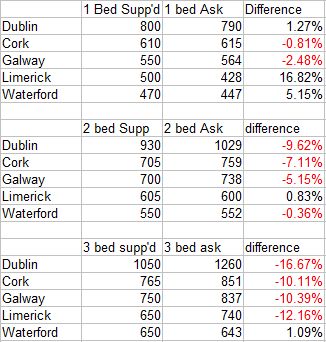 It shows that far from being some big ‘give away’ that in the actual areas that the supplement is most needed and used that often it is BELOW the market asking price, meaning that in many cases the person actually has to make up the difference.

In particular the 2 bed apartments interest me because they are the key accommodation in ‘standard letting property’ (we’ll continue to just breeze past the uncomfortable non-inclusion of actual houses in the example) and in every major urban centre the figures are negative or only up less than 1%.

In the three bed category it is an even bigger divide with a greater than -10% in 4 out of 5 urban centres.

And this is where it gets unpleasant. There is a risk premium to letting a property to people on rent supplement, the PRTB backlog is not just made up of tenants who had their deposits kept, and in those cases there are a percentage who will still lose based on the evidence provided at the hearing.

Rent supplement is not ‘guaranteed’ because in many cases the tenant controls whether it gets paid or not, and letting agents will tell you that in general a property let out to a family on rent supplement will have greater wear and tear – hence the ‘no rent supplement’ ads you see, implying that there is a genuine increased cost that comes to renting a property to a person in receipt of it.

So, when you look under the hood of the figures you find that in the major urban centres where rent supplement is used most that far from being a give away that in fact it doesn’t cover the price, so landlords either discount for the tenant or the tenant has to make it up themselves it is nothing like the image portrayed when you first examine the issue.

The propertypin has proved nothing, I don’t often visit the site because I was banned for having a ‘commercial name’ [three years after taking the name up!]); and you can consider this ‘sour grapes’ if you want, or a rational examination of faulty analysis, whatever floats your boat!