Property Tax is a good thing, but only one type of it. 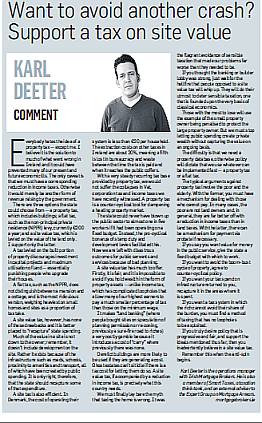 We had an opinion piece in the Sunday Times this week in the ‘Money’ section, it was about property tax and the different types that the state have to choose from, property tax could be a very beneficial option for Ireland but only if it is implemented correctly and done on the correct basis, otherwise it just becomes straightforward ‘revenue raising’.

You can read the article by clicking on the image to the left, which is the .pdf version of the text below:

Everybody hates the idea of a property tax—except me. I believe it is the solution to much of what went wrong in Ireland and it could have prevented many of our present and future economic ills. The only caveat is that we must have a corresponding reduction in income taxes. Otherwise it would merely be another form of revenue raising by the government.

There are three options the state could choose from—a property tax, which includes buildings; a flat tax, such as the non-principal private residence (NPPR) levy, currently €200 a year; and a site value tax, which is levied on the value of the land only. I support only the latter.

A tax levied on the built portion of property discourages investment in capital projects and maximum utilisation of land—essentially punishing people who upgrade their houses. A flat tax, such as the NPPR, does not distinguish between a mansion and a cottage, and is the most ridiculous version, weighing heaviest on small homes and sites as a proportion of tax take.

A site value tax, however, has none of these drawbacks and it is better placed to “recapture” state spending. Much of the value in a site is not down to the owner; remember, it doesn’t include development on the site. Rather it exists because of the infrastructure such as roads, schools, proximity to amenities and transport, all of which have been created by public spending. It is only right, therefore, that the state should recapture some of that expenditure.

A site tax is also efficient. In Denmark, the cost of operating their system is less than ¤20 per household. The extraction costs on other taxes in Ireland are about 20%, meaning a fifth is lost in bureaucracy and waste between the time the tax is paid and when it reaches the public coffers. With a very steady recurring tax base provided by property tax, we would not suffer the collapses in Vat, corporation tax and income taxes we have recently witnessed.

A property tax is a counter-cyclical tool for dampening a heating property market. The state could never have blown up the public sector to almost one in five workers if it had been operating on a fixed budget. Instead, the pro-cyclical bonanza of stamp duty and development levies facilitated this. Now we are left with disastrous outcomes for public servants and services because of bad planning.

A site value tax has much to offer. Firstly, it is fair, and it is impossible to avoid if you hold wealth in the form of property assets—unlike income tax, which has complicated loopholes that allow many of our highest earners to pay a much smaller percentage of tax than those on the minimum wage. It makes “land banking” (where people bought sites on speculation of planning permission or re-zoning, previously a sure-fire road to riches) a very costly gamble because it introduces a cost of “carry”where previously there was none.

Derelict buildings are more likely to be used if they are generating a cost. Ghost estates can’t sit idle if there is a tax cost for letting them do so. A site value tax, if accompanied by a reduction in income tax, is  precisely what this country needs. We must finally lay bare the myth that taxing the home is wrong. It was the flagrant avoidance of sensible taxation that made our problems far worse than they needed to be.

If you thought the banking or builder lobby was strong, just wait for the hellfire that people opposed to a site value tax will whip up. They will do their utmost to deter sensible taxation, one that is founded upon the very basis of classical economics. Thosewith the most to lose will use the example of the small property owner being penalised to protect the large property owner. But we must stop letting public spending create private wealth without capturing the value on an ongoing basis.

The difficulty is that we need a property database, otherwise policy will dictate that we use whatever can be implemented fast—a property tax or a flat tax. The typical arguments against property tax involve the poor and the elderly.With the former, you must have a mechanism for dealing with those who cannot pay.

In many cases, the poor are not land owners and, in general, they are far better off with a reduction in income taxes than in land taxes. With the latter, there can be a mechanism for payment via probate if necessary. If you say you want value for money in the public service, give the state a fixed budget with which to work.

If you want to avoid the boom-bust cycle of property, agree to counter-cyclical policy. If you want your tax spend on infrastructure returned to you, recapture it in the areas where it is spent. If you want a tax system in which the rich cannot avoid their share of the burden, you must find a method of taxing that has no loopholes to be exploited.

If you truly desire policy that is progressive and fair, and support the ideals mentioned thus far, then you inadvertently believe in a site value tax. Remember this when the anti-spin begins.

Karl Deeter is the operations manager with Irish Mortgage Brokers. He is also a member of Smart Taxes, a taxation think-tank, and an external adviser to the Expert Group on Mortgage Arrears. mortgagebrokers.ie