Gold prices broke the $1,000 mark again and have been hovering around that mark for some time (today’s spot price is $991.91), this is making headlines as people comment on ‘record highs’ that the metal has reached in nominal terms (no inflation factored in), if you adjust for inflation the current price would need to be c. $2,500 to match the $850 peak reached in January 1980. 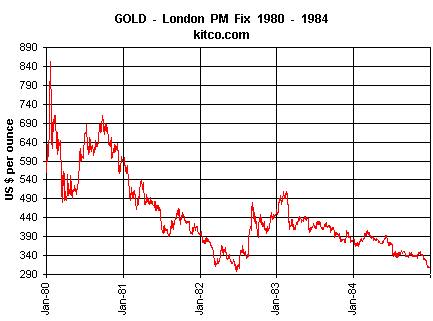 The Dow/Gold ratio is currently 9.7 historically during a crash you would see gold prices surge, the peaks in the graph below are the low points of gold prices/high Dow, and you can see that in the past (c. 2000) it would have taken 40 oz of gold to buy the Dow, the historic average was around the 5 or 6 oz mark which would mean either the Dow is overpriced or gold is under priced, a ratio of c. 6 would put gold at a price of $1,605 (Dow at 9630) and at 5oz would price gold at $1,926. The hidden aspect of the whole equation is that of inflation, by viewing prices relative to gold prices it tends to strip out some of the market trend linked to inflation. 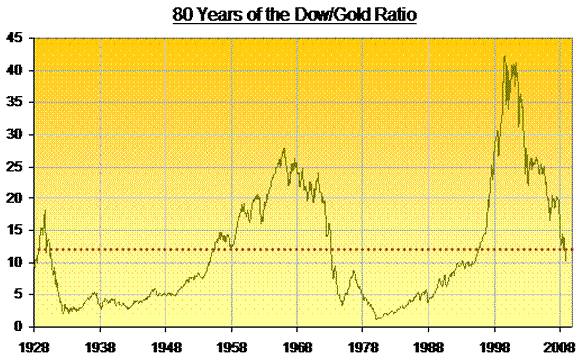 Given the historic issues mentioned thus far, it is (in my opinion) fair to say that gold is not excessively overpriced, or perhaps even overpriced at all.

But this was a blog meant to be about silver?! Yep, its about silver, but with the historical importance of putting gold in perspective in order to make the point which is this: Silver probably has higher upside than gold in 2010.

From the time of Alexander the Great, through the life of Jesus, and until the end of the Roman Empire gold was priced at c. 12 ounces of Silver. During the bi-metalism era the ratio was c. 15 and the average over time is around 16, so irrespective of prices at the time, historically if you have 1 ounce of gold you can buy 16 ounces of silver with it and vice-versa, it actually correlates to the amount of silver and gold occurring in nature that comes out of the ground at extraction. So hopefully you are seeing why the price of gold is so important now?

There are basically two situations at hand, either gold is wildly over priced or it is not, and if it isn’t then the gold silver ratio of 62 (silver trading at c. $16) means that there is a sizeable upside on the price of silver – using the more recently historical average of 50 (approx) would put gold at a price of $750 and there are few in the market (even amongst precious metal doomsday commentators) that would see gold trading at those levels any time soon after such continued resistance at levels over $900, and thus we have a compelling argument for the upside in silver, because, unless ‘this time it’s different’ then the ratio needs to revise to mean.

If hypothetically gold lost half of its value and went to $500 (dow/gold or gold/oil ratios aside), the traditional gold/silver ratio of 16 would assume a price of $31 which is about double the price today – but the return of that ratio is only likely if we re-enter a 70’s style stagflation economy (and in that event gold would likely push higher in any case).

Silver historically has a tight correlation with gold and while the long term historic trend was a SGR of 16 the reality is that for many years it has steadily been more in the 45-55 range which still implies a silver price of $18 which would still represent a 13% gain if the range is met at 55 (which is more the more conservative figure).

This still bides well for silver even if gold stays at the current level, however, if you are still bullish on gold and expect to see it at $1,200 within the next year then it would imply (at worst) a SGR pricing of silver at $21.80 which is a 36% upside on silver versus at c. 20% upside on gold. The other thing that happens when gold runs strong is that silver sometimes goes over value in tandem with it, in 1980 the SGR was 17 when gold hit a high, if that happened today silver would trade at $58! That is a bit too ‘pie in the sky’ for my personal liking, but silver trading somewhat regularly over the $20 in the next year isn’t.

The point is simple, silver may currently be the better metal of the two most well known nobles to get involved in. It also doesn’t hurt to consider some past performance (although we prefer to concentrate on future upside!). 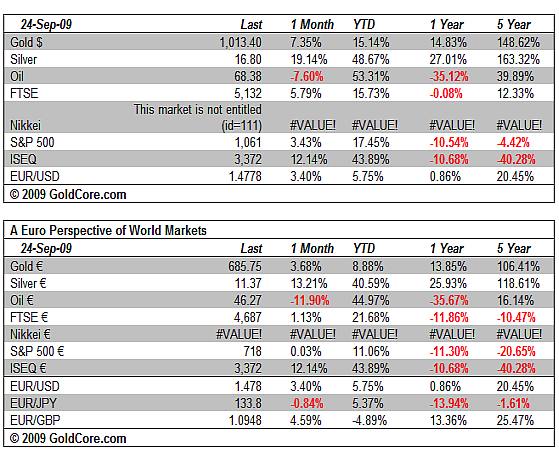 Silver has actually outperformed (in Dollar or Euro) every other comparable in the graph above over a five year period in both $/€ and also in the 1yr range and it only loses out to oil in the YTD. (many thanks to Dublin based GoldCore for the figures!).

To actually buy silver you can do it one of several ways, you can buy certificates, bullion or coins, we’ll do another post sometime explaining the various processes, you do need to be careful of VAT liabilities depending on how you proceed, if you can’t wait for that post and want specific answers you can always call us of course.

The fact that so many Irish investors totally overlook precious metals is a shortcoming of our investment community, precious metals have a proven record of maintaining their value in the face of any contingency, and responsible portfolio design should include some level of exposure to precious metals, if yours doesn’t then you shouldn’t question your adviser, you should question your choice of where you obtain your advice, you don’t have to master every aspect of the investment world, but if you are paying for advice either directly or via management fees then there is somebody out there who is paid to do that and you should at the very least be given the option and argument for precious metals.