Poverty, more than just a matter of money 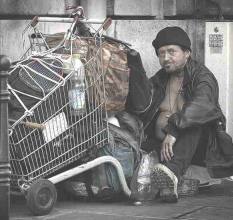 This article is about poverty and is part of the Blog Action Day 2008 in which blog writers from around the world write about a certain issue and do their best to address it and raise awareness.

The topic is poverty and what I mention here will be based partly on observations and insight gained while in South America, Central America, the United States, Europe and Asia. I haven’t been everywhere but I have been enough places to see that poverty is a societal disease and we need to find a way to cure it.

Having been in the slums of Jakarta and also in the Favelas of Rio de Janiero there are a few simple observations that join the two together – People here have widespread illness, the number of amputees, people on wheelchairs and those on crutches is skewed heavily in these areas and it bucks the trend you see elsewhere around the respective countries. The people also look old for their age, they range from very low body weights (due from undernourishment) to obese (such as in the USA) from reliance on bad nourishment.

When I say poverty is a ‘disease’ I also mean it quite literally, poor people have shorter lives, obesity is now a cause of death ahead of smoking related illness in the USA. Poverty does not discriminate, it hurts people in the developed world as well as the third world, although it is safe to say that the ‘Third World’ brand of poverty is extremely striking in comparison to what I would describe as ‘North American’ or ‘European’ poverty.

India and China – the worlds two largest populations – have endemic rates of poverty, and for all of the innovation of our time the bright new machine of globalisation is an utter failure when you consider the number of people living on less than a dollar a day.

Perhaps if they had resources it would be different? However, we need no look too far before we see areas like the Niger Delta, one of the worlds best oil areas (they have a type of oil called ‘light sweet crude – easy to get and and easy to process), and yet the average Nigerian – particularly in the Niger Delta – is impoverished. The last genuine politician they had was Ken Saro Wiwa and he was murdered (with the support of Oil Companies).

Elsewhere Oil brings equal misery, the dictatorship that spawns almost every suicide bomber (Saudi Arabia) has a deplorable human rights record, the DRC (Diamonds/Gold) equally has constant rebel revolution and somehow it has turned out that if you took a map of the worlds resources, then a map of where there are wars and put one on the other you are looking at the same map!

The World Health Organization website will confirm (if you browse it) that in poor countries abuse against women is higher, literacy is lower, often adult HIV rates are higher and the problems go beyond the agenda of money, it becomes a matter of health, education, generational poverty and a life of no hope for the future.

The only good news is that every individual can undertake to make a change, this can be a charitable donation, it can be voluntary work with poor people at home or it can be traveling to a poor country to help out there, the point is that poverty does not need to continue unabated, we can as humans and a society make the change and save lives and this world it only takes the dedication of one person at a time, hopefully the next person to join the list is you.