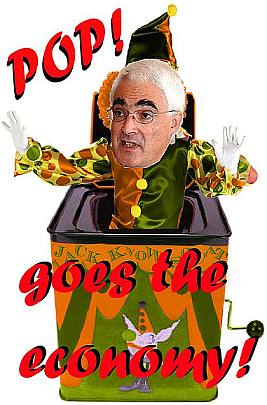 Chancellor of the Exchequer Alistair Darling announced the UK budget yesterday, and it was revealed that the UK would have to issue more debt (Gilts) in order to continue with their present plans, the debt levels will rise to a record level of 79% of GDP by 2013/14. The period of 2009/10 will see £220bn of gilts issued, a full 20% greater than expected, on one hand this might be the ‘shock and awe’ approach, on the other it is extremely inflationary and has had an instant effect on GBP long term interest rates.

Several factors fed into this, yesterday the Public Sector net cash requirement was forecast at £16.5bn but the actual requirement was £28.4bn. Two lessons that countries around the world will learn from the current financial crisis are firstly – the need for counter cyclical planning, the second is the extreme danger that a country is put in by having a bloated public sector. Britain is also facing deflation.

Sterling is likely in for some secular devaluation, Darlings comment that ‘a competitive exchange rate will help exporters’ is a portent of the direction sterling is headed in. The IMF also gave a gloomier outlook for the UK than HM Treasury did.

So what next? Well, unemployment hit 2.1 million people, the issue with the UK figures is that they don’t count people on disability, and the great achievement of almost complete employment levels was masked in the past by the way they did their figures, that still stands, it means that the weight of social programme debt is rising more rapidly and a greater percentage of the population is actually under/unemployed.

The biggest deficit since WW2 means that yields will rise (servicing gilts will be harder) and gilt prices will fall. This, mixed with monetizing debt (via quantitative easing) are leading me to believe that there will be a  dual risk situation coming down the line, that of deficits during inflation – this will mean that the money is not there to continue with many vital public services (or you go into hyper-inflation), and secondly, that of potential default on the back of hard devaluation (yields get so high that they are unsustainable). These are the nightmare scenarios, what we are not saying is ‘this is likely’.

The real question is whether they can support the debt and yield indefinitely? Getting the mixture right will be very very difficult. The dollar is equally facing a similar risk, if it faces downward price pressure the dollar selling will begin again. The sense of the ECB seems to be (thus far) standing the test of the market, and while people can cry about deflation and the need for intervention, central bank austerity is – up to now- proving to be the better course, the interbank yield as we saw recently has the ECB taking a middle course.

The graph below shows the pressure being put on interbank rates in a single day due to the budget announcement and the future inflation is factoring in already. Look at the sudden spread from the 1 year money onwards, that is a very significant spread given the 24hour period it represents and it is all occurring from the 12 months into the future mark meaning that there is a degree of interpretation that we will start to see inflation in 2010. So the interbank market seems to believe this is the situation, the bond market is the next place to watch. 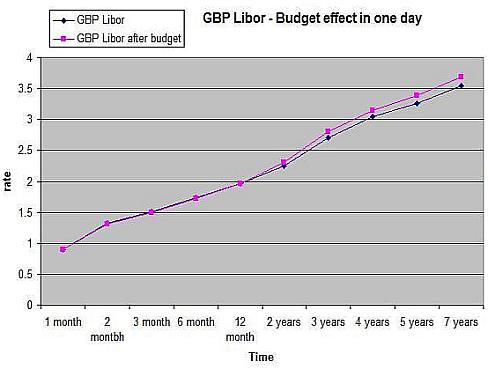 So let’s take a quick look at bond prices, if what we are saying today is true then we should see the yields in the longer term bonds rise and the prices drop, here is a picture of today’s prices from Bloomber. 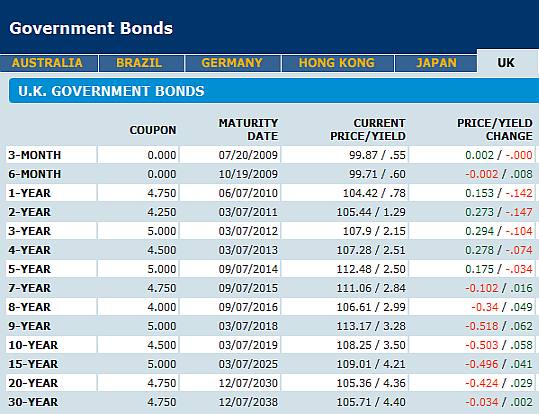 And it seems to be in conjunction with the view that Britains treasuries are headed into dangerous waters. The sterling will have to face a decline in order to meet obligations and the Bank won’t be able to re-absorb money as quickly as they created it thus the anti-inflationary elements of their operations will ultimately have to fail. Again, this doesn’t mean ‘pop goes the treasury’ but like a distant ice-cream van, there is a familiar tune in the air and it seems to be getting closer.