Paying off your mortgage early (we got it wrong)

Yesterdays Irish Times carried a story in which our firm was mentioned regarding how to reduce your mortgage balance faster by paying every two weeks.

The idea of paying twice per month would give you 24 repayments whereas paying ‘every two weeks’ would result in 26 payments. It’s the same type of simple calculation error that makes people say there are 4 weeks in a month rather than 4.33 months (52/12)

If you are merely using a time period where payments add up to the same amount then the actual end results are somewhat the same, I used the formula below

M = Mortgage Repayment
P = Principal borrowed
i= interest rate (for monthly payments this works out at i/12)
n= payment periods (eg: 10yrs = 120 monthly payments)
And took an example of a €250,000 mortgage over 25 years with a 5% rate after which you get this 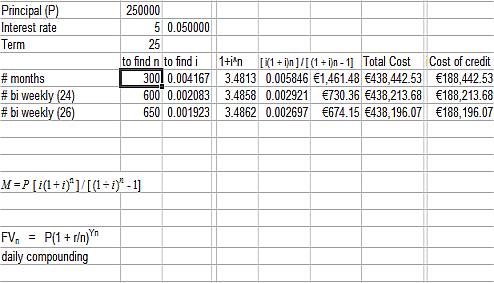 Showing that if you have a consistent payment over any time period the number of payments doesn’t matter if the gross amount remains the same.

Because of the nature of daily compounding (you’ll see that I started to tinker with that formula in the table above, it’s the FVn one) you do save minor amounts because there is a small repayment between periods but it is literally cents not Euro we are dealing with.

I’m kicking myself because if I had run the numbers I would have spotted this, but I didn’t and that means that irrespective of this there is culpability from a commentary side of things, I don’t generally comment on figures unless I have looked ‘under the hood’, therefore I owe an apology to people who may have read this and thought that there as an easy solution to make their lives financially better and by their interpretation there was an inference that we did the calculations. My dad used to say ‘if it looks to good to be true….’, you know the rest.

Having said that, it was also an honest mistake by a consumer champion who took the figures in good faith from the source providing them. Mr. Pope has done countless good for people in Ireland and that needs to be taken in perspective, something which a lot of websites commenting on this have failed to do, today’s Times carried the correction which was the soonest publication day possible.

As recently as this week it was Conor Pope who caught the ESB out on not offering the best deals to people in arrears and due to his actions there is a huge amount of political pressure coming on the ESB from Government Ministers and the NCA.

For my part, mea culpa, we have a policy of apologizing early and often when we are wrong, and although the calculation was not ours, we should have double checked before making any comment. We think Conor Pope is doing a great job and look forward to working with him as we do all people forwarding the objectives of savvy consumers; even the good people get it wrong from time to time, for our part we were just idiots, but hope you’ll forgive us!