I was on the panel on Frontline recently and during it I mentioned a thing called ‘Negative Equity Financing’, we were asked by a few journalists and some clients about it, so hopefully this post will help to clear up what it is, and how it may work.

For a start, I’m anti-bailouts, in general and in particular, so debt forgiveness is not really something you’ll  see supported here, but we are big believers in facilitation, and any means that can help to oil the cogs is likely better than one that tries to create a new machine – albeit in time that is what we need; changes to our property and debt laws. However, in the here and now facilitation is quicker and easier to implement and has a better chance of reaching those it is intended for.

Negative Equity Financing is the idea we have put forward, but it isn’t just a case of doing a short sale because that doesn’t work in Ireland. 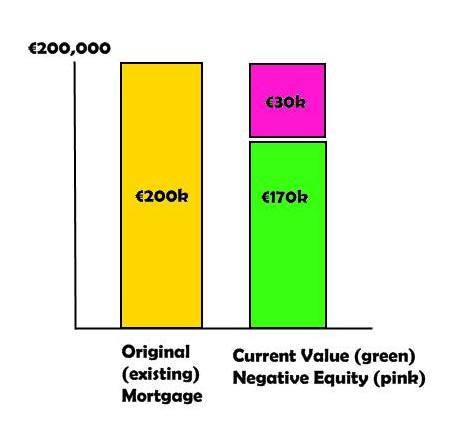 A short sale is where a person sells a house for less than the mortgage owed on it, in the USA you may or may not be able to do this, it depends on secondary lenders (if you have a 2nd lien on the property) and whether you are in a judicial or non-judicial foreclosure state, in Ireland it’s all the equivalent of ‘judicial’, to get your house taken you need a court ruling. Thus we need to find a way around that issue.

To do this we could have a facility that advances cheap credit to cover the shortfall, it allows the sale to take place but the individual carries out the difference as a low cost loan that can be paid back over time at a very low interest rate.

In the picture to the left we see a current property value (in green) v.s. the mortgage secured on the property (in yellow) and the negative equity element of it (in pink), generally mortgagees has paid a deposit so all said they may be down over €50k but it is really v.s. the mortgage that the issue arises if one wants to move or sell – because it is greater than the price you could achieve on the open market, meaning the person is stuck.

Ideally the banks would let this happen but it has twin issues of using available liquidity and on a secondary basis, unsecured debt is highly risky – you don’t want to put risk like that back on the balance sheet after we have paid so dearly to remove it. It also reduces the asset value of the bank/building society and the remaining loan has virtually no recourse. All said, banks would rather take the property (in normal circumstances), except for recently where they would rather not take it because it means realising market prices and that is why they are not complaining about forced forbearance. 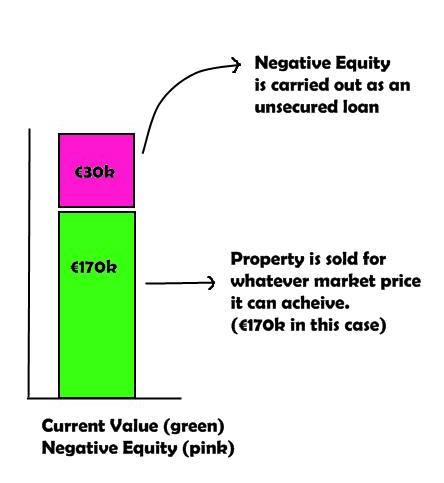 That is where the ‘facilitation’ comes in. The state could issue bonds in return for the debt, this would be a similar type of bailout to what they did in NAMA, except this would be for regular borrowers as opposed to dealing with development loans. In this case the loan would be backed by the person and secured against their tax credits (more on this later).

The actual funds for this could come from the same source that the likes of HomeChoiceLoan obtain funding from (loan finance from the Housing Finance Agency). Indeed, HomeChoiceLoan could be the very lending vehicle to do this as it is an existing operation that is not lending in the manner it was intended to.

The state would need to pay the bank a certain amount of money (coupon) for this facility [3 month euribor perhaps] and in return it would be able to charge the borrower a near cost interest rate – lower than a bank could ever secure thus ensuring the person isn’t affected by the trend in lending margin increases, but at the same time greater than the token interest paid to banks which allows the process to occur. In doing this the bank maintain asset quality and a small cash flow, while the state incurs a small profit on the exchange and can obtain reasonable security (via the tax system).

This would allow people in varying degrees of negative equity to sell and move on or perhaps just sell, the main thing is to get people out of debt they can’t service, the general reaction of ‘keeping people in the family home’ is missing the point if the family home is a sinking ship, when that’s the case it is generally the last place you’ll want to be.

So let people get out from under debt they’ll never be able to service, especially with the margin hikes and eventual ECB rate increases that are coming down the line. They can then services a much smaller debt at secured margins (as it is state backed and funded) and the security will be against their tax credits. How does that work? For a start, it has never been tried so this is supposition.

However, the idea would be that if you start to default on your loan that Revenue take away your PAYE allowance, or any other state benefits you would normally be in receipt of – not to the point of pushing people into poverty – but to the point of ensuring that in the majority of cases that eventually the debt will be repaid at the artificially low rate of interest, this solution is not pain free, and it isn’t meant to be. 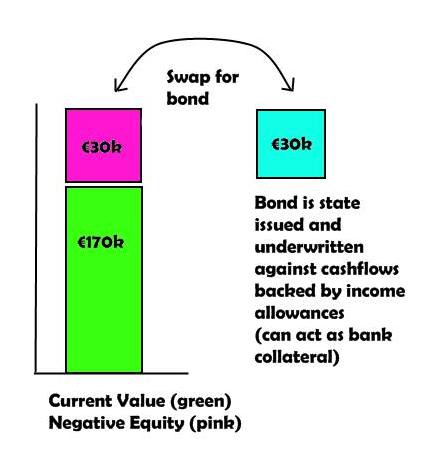 The obvious flaw is that a person could leave the country, but if they are willing to do that then they might do it anyway and even an old fashioned bailout might not work, a borrower could easily abandon their property despite any plan. So if a person is willing to leave at any cost then you have to accept that it’ll happen in some cases.

Negative Equity Financing would instead make sure that people keep manageable debt and in many cases they could even stay put, renting the house back from an investor and the warehoused loan could have a delayed start time, in any case, the state would be able to collect in all cases except where the person flees the country.

This could also have some positive impacts for retail credit, by reducing traditional impairment (which has so many knock on effects).

This isn’t a ‘bailout’, rather it is a means of letting people pay their debts in a manageable manner, the current structure of debt is such that there are people who will never get out from under it (as it stands today), but if there are market or semi-market propositions that facilitate them in doing this they are perhaps worth trying. The current approach is actually increasing the indebted persons problem, forbearance measures don’t wipe the slate, rather they continue to add interest to the capital sum owed making the situation worse.

An idea like this would allow people who want out to do so, but to pay a price, which will hopefully help to avoid the obvious moral hazard issues that arise with straight out debt forgiveness. This is a ‘NAMA for the little person’ that won’t leave a sour taste in your mouth.