Yesterday the National Asset Management Agency (NAMA) legislation was brought out in the Dail (that’s the Irish Government buildings for our international readers) . We have put some of the developments into simple graphs to give an idea of the way NAMA will work and what the prices are as well as what they mean (for the pedants out there- they were drawn by hand to demonstrate the point). 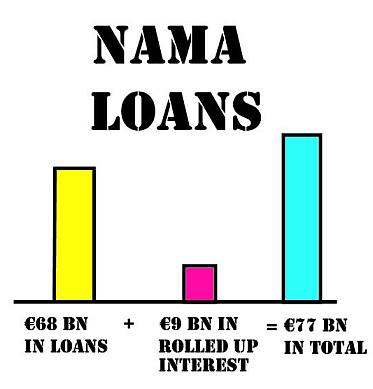 So the total value of the loans is €68 billion, adding on €9 billion in rolled up interest – development accounts often had this factored into the end sale price, generally showing c. 15% profits (as a minimum) with the roll up included. 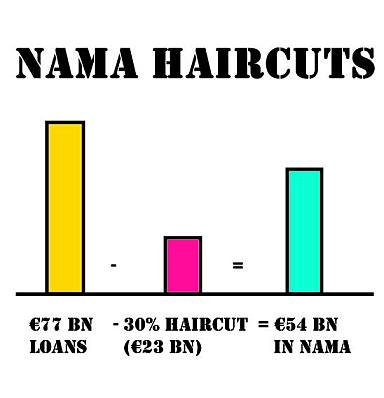 The €77 billion in loans will receive a 30% haircut (across the board) meaning the price paid will be €54 billion. It is important to note that different institutions will see larger haircuts than others, so it might be that BOI gets 20%, AIB 25% and Anglo 37% / INBS 42%, the 30% represents a varied pot in which individual loan sizes and haircuts will vary, having said that we know already that the biggest discounts will need to be applied to INBS and Anglo. 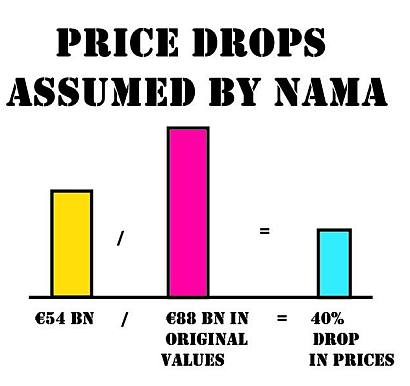 Brian Lenihan stated that the original value of these assets was €88 billion, of which the loans were €68 billion (before rolling interest was added on), an average LTV of 77% applied (which is over standard commercial lending levels so some more digging may be needed to see if there were cross-security/cross collateral considerations or cash flow producing securities for additional lending involved). These loans will being bought for €54 billion imply a 40% drop in the values of the assets on an economic basis (not today’s market price basis).

Each loan going to NAMA will have 185 queries/questions required on the property itself, and a further 300 on the loan, that means the diligence will be c. 500 questions that must be answered for each property. The staff of NAMA (c. 50) can’t cope and thus the banks are taking people out of credit and having them go to work for NAMA but on the bank payroll, so in essence NAMA has outsourced the work at no additional personnel cost which was a smart move (one of few). 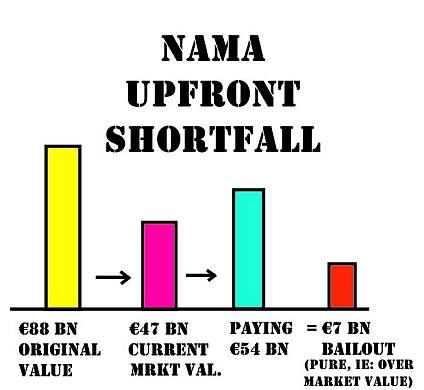 The actual value of the assets in today’s market is (we are told) €47 billion, this means that there is an upfront shortfall of €7 billion, so no matter what happens there has been a potential tax payer cost of €7 billion at a minimum, obviously that is the market value though and not a long term value which assumes that prices will eventually rebound (the estimate is 10% in 10yrs), that point can be argued for and against, the issue will be (in my opinion) the ongoing cash flow to ensure loans are serviced. There isn’t any information put forward about expected default rates and that could easily skew the numbers.

The debt is also predicated on Euribor and while Liam Carroll’s case was tossed out of court because it relied on low interest rates, we have pegged the NAMA on the same hopes! It tells me that this plan probably wouldn’t stack up if it was provided judicial oversight, then again, fairness was never part of the plan.

Having said that, of the assets going across c. 40% of them are cash flow producing assets – in some cases this is blocks of apartments that were retained by developers and let out or other commercial rents. The banks will have a big job ahead of them in the near future: they will have to raise some capital quickly to avoid dilution of their shares/potential nationalisation (or at least majority state ownership which is effectively the same thing), if today’s share price performance is anything to go by the appetite is back so this seems likely to be a working solution. NAMA isn’t about fairness, and in that respect it is a massive failure, it is about a plan with a chance and in that respect it has a better chance of success than the alternatives put forward.