When a bank creates a loan that becomes an asset, the property it is secured upon is the collateral (sorry my teaming millions, I know I repeat this eternally). So if NAMA decide to become a brand of lender this October as we saw from an article in today’s Independent; then how does it work? Where does the money come from? 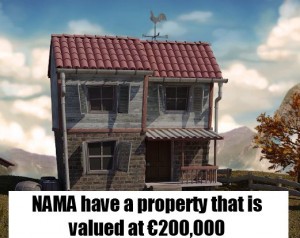 Take a property that they are putting up for sale (1st picture: pic not related). We’ll say for the sake of this example that it is worth €200,000.

The NAMA position may be that they paid more or less for this particular property but it doesn’t really matter; what does matter is that for the sake of them selling it the property may as well be unencumbered, there is no lien above that held by the NAMA.

This means they can give a title deed to the buyer when they sell it – but don’t forget, when a person takes out a mortgage there are two sales/purchases, the individual buys from the vendor (1st

sale/purchase) then they sell it to the bank in exchange for the money [we call the ‘mortgage] to complete the transaction (2nd sale/purchase) and the bank then take the ‘1st lien’ or ‘right’ on the property.

Prior to this they put in their deposit (10% or €20,000) which becomes their own, this is their ‘equity’, which is why ‘negative equity’ is described not as value versus the market (that’s called ‘price’), rather value versus the mortgage secured on the property.

What NAMA have indicated is that they will provide a kind of ‘bridging finance’ for buyers, so a certain portion will be made up of Bank borrowing, just a regular mortgage (we’ll speculate that it will be 60%). 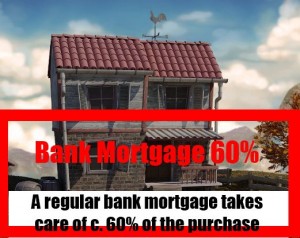 This has a key advantage for the bank who will have 1st lien (because NAMA have said that there is some loss sharing mechanism which would indicate that at best they hope for 2nd lien). First of all they have a low loan to value (LTV) mortgage – considered lower risk because before the property gets into negative equity from the banks perspective (60% of 200k is €120,000) the price would have to fall a further €80,000. Secondly it means that they can lend a little more freely because their risk in this instance is reduced, it doesn’t mean ‘lax standards’ but it shouldn’t be as stringent as the lunacy that prevails now where it is so difficult to obtain credit. 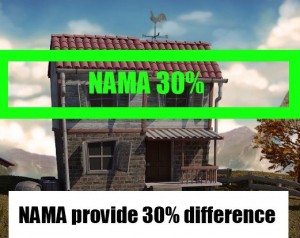 Thus we have the NAMA input; but where does this money come from?

Quite simply it comes from nowhere.

How? Because the property is unencumbered so what NAMA do is draw up a loan agreement (that then becomes an asset) and they give you the keys, along with an agreement that (speculating) might say that if prices fall then after 5 years there is some kind of loss sharing mechanism.

This means that they go from a situation of having an empty apartment generating nothing into the following:

If there is ‘loss sharing’ don’t forget, the buyers equity gets wiped out first so it is not a case that if values fall that NAMA are onto a loser, rather it is if they fall greater than 10% over the next 5 years, and that may well be likely but don’t forget, they have money in hand today which will generate profit elsewhere.

If prices fell a further 20% (which could happen and was hinted at in the Central Bank paper ‘Scenarios for Irish House Prices‘) then NAMA only have €20,000 to worry about and depending on the loss sharing scheme put forward all they do is write down the value of their loan on that basis giving the following:

Not a bad deal (for them) all said.