Moving paper or ‘selling your mortgage’. 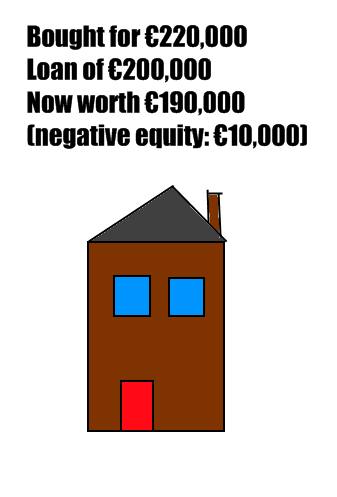 In the USA and Canada they sometimes refer to a process of ‘moving paper’ which is where a person sells their mortgage – the actual debt and all the conditions that go with it. That might sound kind of pointless but it would certainly be a valuable option in Ireland and could perhaps offer (if it existed: it doesn’t) a selling advantage of debt holders over non-debt holders in selling a property.

Take an example of a person selling a house for €200,000 if they were able to offer their current mortgage of ECB+1% to the prospective buyer then it might be an attractive proposition! In particular, the bank might benefit because even if the person was in negative equity it might be worthwhile to buy such a debt product at a premium.

People don’t think about buying or selling mortgages (institutions do it all the time), and yet we readily consider buying and selling debt (which is what the bond market is). Why can’t we do the same for the individual that we do so rapidly for corporations and countries? The answer is that the banks don’t want to see this happen, if they were willing to re-underwrite a loan there shouldn’t be anything stopping a person from being able to sell their mortgage.

Take that first example again, and this time we’ll say they are in negative equity too, they bought for €220k and the value is now €190 and the person wants to sell but can’t because they are locked in and one of the couple who bought it lost their job and the banks is making moves toward taking back the house: what is the better outcome, a repossession, a short sale or a partial clearance of the debt with a new person offering the security as a lender?

Repossession: to be avoided at all costs, even the banks generally lose on these.
Short Sale: tricky because although a large portion of the loan might be cleared there is still a highly risky unsecured debt that has virtually no recourse outside of the persons credit history being under threat and frankly, most people are willing to sacrifice that if necessary.
Sell the paper: if the seller could say to a prospective buyer ‘if you buy my house you can buy the ECB tracker on it, they are no longer offered and it will only cost you an extra 10k’ then it would be a win-win-win situation for the bank-current owner-prospective owner. 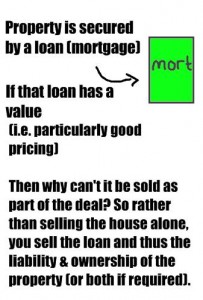 How? The bank get a €10k over and above a 10% deposit up front, the property sells at €190k and thus €19,000 is paid across – standard terms. Then the person buys the financial product for a consideration of €10,000 clearing the negative equity, or perhaps only reducing the short sale risk.

So now the bank has a cash injection that they can lend out or put towards capital, they have a lower risk loan book as the property is no longer in negative equity (good if they ever try to securitise their loans), and of course, there is a new and better client underpinning the debt which will help to reduce impairment.

The seller wins because they get out of a bind and have used their existing financial product as an incentive to a buyer to buy their property, so while the place might not have a new paint job like the one down the street, it does have superior finance backing it.

The buyer wins because for a one off lump sum they effectively buy a time travel machine that allows them to go back to early 2007 and obtain a financial product that is no longer offered in the market at a premium which over time will really pay off if they were going to be variable customers. Banks are going to raise rates, the writing is on the wall, and in that example (where the ECB has nothing to do with it) the price promise of a tracker mortgages is very attractive.

You could say ‘well, a person might buy that house anyway?’, but if there are lots of houses for sale in any one area (and that is certainly the case across the country!) then why aren’t banks taking steps to make sure that it is the properties that they currently underwrite that are sold in this manner and made safer for their balance sheet and their shareholders?

Every owner occupier seller is a potential loan book risk [outside of the standard ‘trading up’ deal where a second purchase is secured at the same time and its in a chain] because the primary selling activity is happening under distressed conditions either individually or in the market generally (geographically). At the same time negative equity is trapping many people who want to sell into a property they can’t afford and arrears that will never be paid are building up.

Selling a mortgage might help to resolve some of this, and while banks wouldn’t favour selling trackers (because they became loss making loans during the euribor decoupling of 2007-2008) it makes better sense to have a performing tracker with lower loan book risk than a non-performing one on a house that will be a loser even if you repo it.

The only question therefore isn’t ‘how’ this could be done, but ‘why’ banks are not doing it already.