Yesterday I made a fairly bold statement stating that I believed we are on the cusp of a recession. Today I am going to point out some of the things that may shape global policies beyond economy.

Simply put its Mother Nature, Naturomics, maybe somebody coined that phrase before me – who knows, what I’m trying to say though is that nature will increasingly have an impact on world economies. The weather systems and ecosystems of the world were in state of stasis for a long time and now we have disrupted the whole thing, derailed a system that worked prefectly well for millenia. The price? 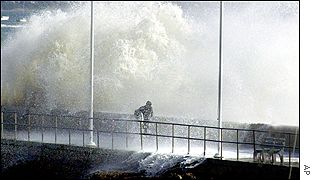 Well, take California (my original home state), during the autumn they had the worst fires on record in a long long time, was the sun particularly hot because we’ve melted away all the ozone? was there no rain because of global warming? were the winds that drove it somehow higher due to shifts in weather patterns being caused by humans? I’m no scientist, so I can only ponder. Then for the last two days California is hit by the worst storm it has seen in fifty years and four hundred thousand are left without power etc. So, maybe there is a market in disaster-recovery goods? Electricity generators, bilge pumps for flooding, interlocking sand bags? Who knows.

Indonesia has eruptions of mud caused by gas drillers, 10,000 families are displaced and scientists reckon the mud might continue for decades!

(picture of houses covered in mud in Indonesia)

My sister in Florida had to leave home six times in 2006 because of hurricanes, and then there was Katrina which really brought the whole operation to a halt and displaced millions.

So be it sun, snow, rain, wind, melting ice, or mud I think that the big ‘leftfield’ or ‘caught off guard’ factor for 2008 is something to do with natural disaster, say that the recession I spoke of (that we’ll realise we are in by the end of Q1ish) doesn’t actually come about but there is a massive earthquake in the USA or more floods in Europe, that can – if its big enough – shake world economies and I believe that any government that doesn’t have a contingency plan for the natural disasters that may befall their nation are living with their heads in the sand.

So try to reduce your carbon footprint, personally I cycle to and from work everyday, and becuase of that I use less petrol, I wear a jumper instead of putting on the heating for an extra hour (although if my wife is home she over-rules this decision most of the time) and we use our green bin and have a composter.

The move to make all lightbulbs into energy saving bulbs is a good one, 17% of world energy currently is used in making light (note to God: when you made ‘day’ was it with the people of the 21st century in mind?).

Anyways, before I meander too far off the point this is my 2008 wildcard: mother nature, she doesn’t mess about so watch out world, the Fed and ECB can do what they want to try and save the economy but who tells mother nature what to do? We nailed the last person with that ability to a cross.