The only growth area in our economy at present seems to be in the deterioration of debt quality . . . but for the second half of the year it will not only be an ‘unemployment’ lead increase, rather it will be with the additional impact of lenders creating the problem via mortgage rate increases that have been independent of any European Central Bank moves (with an general move of c. 1.2% upwards in standard variable rates over the last 12 months).

The quarterly increase in arrears has been near or above 10% for the last three quarters, if this continues we can expect a further 20% by 2011 which would bring the total households in arrears to the region of 43,000 by year end and a likely figure of 50,000 by this time next year.

The solution for more than half of these owners would be repossession, in a functional market economy that is the end result. It is the fair termination of a contract where the borrower is unable to pay and it allows them to put distance between themselves and a financial obligation they can’t afford.

In the last 12 months 387 houses were repossessed, which is about 1% of the distressed stock, but according to the Irish Bankers Federation the rate of repossession by mainstream lenders has gone down in the last quarter to 86 properties, this is the third straight quarter of decline. How is this happening while the general mortgage situation is getting worse? Surely repossessions would go up at a time like this?

Unfortunately, the situation has turned entirely political, and the message that ‘keeping people in homes’ they cannot afford is the preferred solution, this in turn subjects them to endless calls, letters, form filling and stress in dealing with the banks on the basis that it keeps them in the home, but the statistics are showing that it isn’t changing the trend, or giving people the opportunity to get off a one way train. We have no metric of the family deterioration that occurs with financial problems, suffice to say, MABS, FLAC and other representative bodies say it is significant.

The question therefore must ask if a solution that keeps a person holding an asset they can ill afford to pay for is the humane approach, or would it be to release them from debt bondage as early as possible rather than to force them down a path that may have the same end result but with additional arrears interest and stress along the way?

We cannot be seen to encourage people to walk away from their debts, but we would be willing to say that when banks feel a deal may be turning against them in business that they will not continue to fund a project. We know of no reason for households to behave differently.

The rapid growth in mortgage interest supplement and applications for same is turning into a back-door bailout, non-performing loans extended by banks are being serviced by the taxpayer, banks are reluctant to take properties, not simply as a public service – that has never been their remit – rather it is so that the value of those properties do not need to be realised on their balance sheet. Banks assets are based on the value of the loans, not the value of the underlying collateral.

One view is that if you had a business and it didn’t look like it was working out a bank would have no issue in revoking credit lines or offering further support because in their opinion the proposal has soured. For the same reason it is fair to wonder why an individual would be asked to do precisely the same thing when the tables are turned?

A mortgage is ultimately a commercial arrangement and if it doesn’t work out the issue and duties are between the lender and borrower, not the lender, borrower and tax payer, but we are being dragged into the foray through mortgage interest supplement (taxpayer funded), through increased bank charges, through higher taxes which come about as a result of concern about our banking system/sovereign (and the arrears profile with lack of response is part of the issue), and directly by having a property market that is not adjusting in the time that it should.

When property markets reach clearing prices you have better odds of economic recovery (Kevin O’Rourke/ Barry Eichengreen and Agustin Benetrix all recently wrote on this topic), but we are not allowing this to happen, and it means that people who do buy today are paying too much because all of the properties that should be up for sale are not up for sale, it’s a modern ‘beggar thy neighbour’ scenario.

There are answers, but the cheap solution is denial, it has impacted 7bn of loans and only 500m in un-paids, compared to the likes of NAMA  it isn’t expensive, but the resulting reputational risk as a nation is pricey. 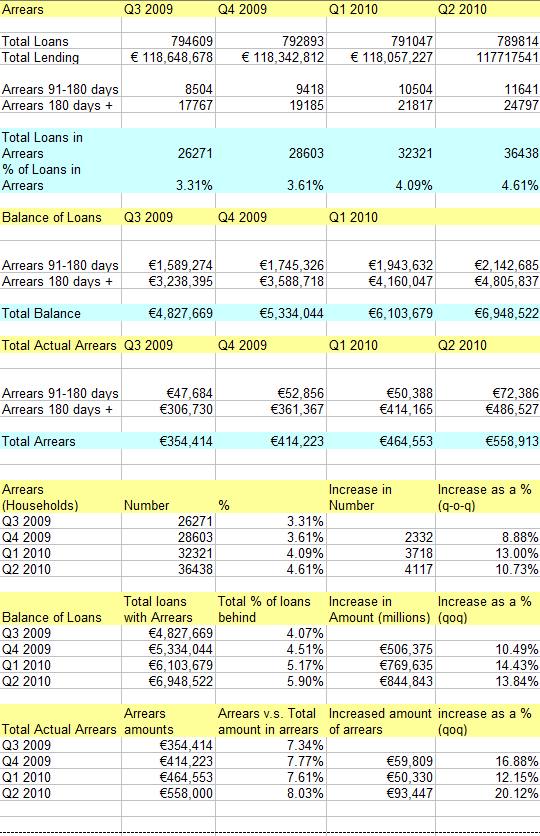