More on pseudo-scientific-legalese from Kilkenny 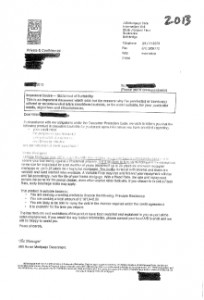 Something that was a strong point of (supposed) fact in the meeting at Kilkenny was that mortgage loans now are not called ‘mortgage loans’ instead they are ‘lines of credit’.

It was also implied that the change of language was very important and meant something.

As a person working in this industry daily that caught me by surprise, thankfully, and unlike other attendees we have the resources to look into this.

See the pdf scan for yourself. The person who said this was telling the truth, at least in part, the ‘credit facility’ thing is mentioned, but elsewhere it’s all about ‘mortgage’ and ‘mortgage loan’, the entire concept is misguided.

If you click on the loan document (click the picture) you’ll see on the first page that it does mention ‘credit facility’ – albeit the scan I did was awful because I had to double black out personal details.

But the ‘credit facility’ bit is underneath the heading ‘home mortgage’ it’s explanatory in nature, not a definition on it’s own. And elsewhere the loan is referred to as a ‘mortgage’.

On the second page the first line is about offering the person a ‘mortgage loan’, the third page is ‘particulars of offer mortgage loan’ and mentions ‘mortgage loan funds’ etc. This is the same description as you saw being used in 2011, the exerpts for that year start on page five.

The other thing that was mentioned at the meeting was that there was ‘new wording’ that banks started to put in since last year stating that you couldn’t put property into a trust.

Look at page four then at page six, they are two years apart and use identical wording on the part that says you can’t pledge the asset into a trust, but that the lender can securitize the loan.

We could be wrong, maybe the wording started, not last year, but the year before meaning you would see it in 2011. The blog comments from our other post on Kilkenny hint at everything that doesn’t agree being evidence of collusion with banks.

That would be compelling except it’s on the loans from 2010, which is from a time before the Kilkenny trust even started (apparently it began in 2011). So perhaps the banks had a secret ‘heads up’ from somebody and put it in prior to the group even starting? Who knows…

The main points are simple, this is yet more evidence of half baked explanation passing for fact, loan offers are still about ‘mortgages’ and the ‘line of credit’ mention comes under the heading ‘mortgage loan’ and is there to explain what the financial product is in plain English.