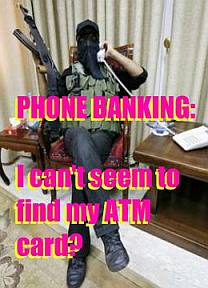 In the last twenty years there has been a huge increase within the financial services industry of ‘anti-money laundering’ and ‘anti-terrorism’ legislation, the trend started almost 20 years ago – the initial Irish take on the theme started with the Criminal Justice Act 1994. In the USA the rules go back further but the primary modern foundation is the Money Laundering Control Act 1986.

This week the new Criminal Justice (Money Laundering & Terrorist Financing) Bill 2010 passed in the Dail, and likely it will be signed off within days by the President and thus become Law. Then everybody in industry has three months with which to train up and become compliant. Yet another hidden and embedded cost in the financial system that will be offloaded onto customers via reduced service/turn around times as well as higher costs.

The fundamental question however, is this: Has all of this legislation and additional regulation achieved what it hoped to achieve? And to that the answer is no.

Bernie Madoff operated the worlds largest ponzi scheme while all of these rules and laws were in existence, the Al Qa’ida flew planes into buildings via an operation that was financed through the same ‘bullet proof’ system, and the perpetrators were in the USA on legal grounds with normal visas. Ireland specifically has seen drug related crime sky-rocket in the same time period.

Crime hasn’t been reduced by creating these laws, rather, during this time it has increased! And the emphasis is constantly that the law helps to prevent drug dealing, trafficking and terrorism. 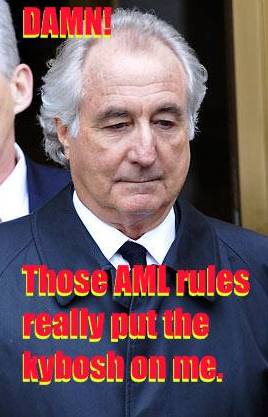 I work next door (literally) to a methadone clinic, trust me, we are not winning the ‘war on drugs’ (as an aside: the prohibition actually creates the market). There are not fewer murders, there world has not become a better place by any tangible metric, nor can any government body provide statistics giving a gauge of success that AML (anti-money laundering) legislation has brought us in real terms.

It is all based upon the premise that anything that reduces crime is good irrespective of cost and therefore worthwhile, minus the litmus test of being based on reality or having measurable results.

Having asked several junkies to get out of our back-yard in work, sometimes with needles literally in their arm, I can tell you this – the illegality of drugs has no bearing on their addiction when it comes to how they live their lives, and equally, criminal gangs are not hampered by the banking system. When was the last time the cops hauled in a criminal gang and kept them interned for money laundering?

They find huge stashes of drugs being trafficked, and then there is the CAB – but don’t forget the fundamental point – in both cases the money has passed through the financial system or has existed outside of it and already, CAB can only confiscate ‘after the fact’ and not before it.

If you work in finance and facilitate a person in laundering money – even if they deliberately trick you somehow into doing it – you are held as culpable as the criminal! By that rationale we should be suing gun makers who’s firearms are used in crimes! It’s a joke, and yet we line up for it year after year.

The underlying advantage to the state – the one they won’t openly talk about – is that AML/Anti-Terrorism laws don’t actually prevent crime or terrorism, rather it ensures that the true golden goose of revenue raising (the average citizen) has no way to avoid having all of their money accountable and therefore they are not able to avoid any taxes.

The cost of money laundering and compliance across every regulated company becomes an additional cost to the end user, a cost that cannot be justified by any measurable means, nor one that has prevented violent crime, drug use, or terrorism. It is there solely to benefit the state by making sure regular citizens never have a way to keep any money hidden from the ever vigilant eye of the state.

I’d love to continue but I have some studying to do, I need to go learn all about something that has everything to do with nothing at all, and only three months to do it in!